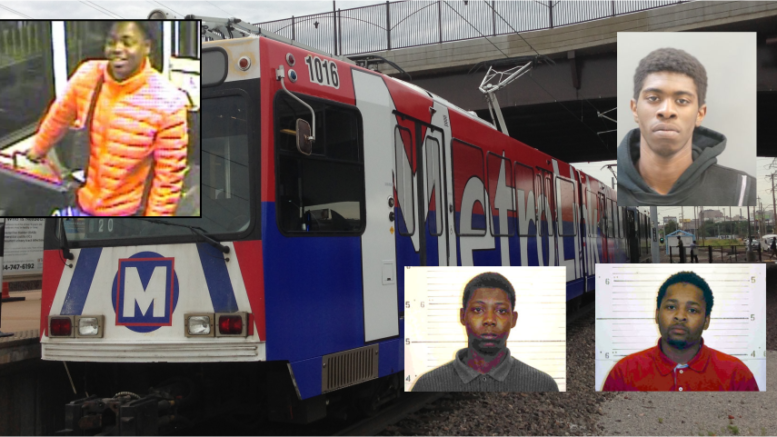 Update: One of the victims died of his gunshot wound today.

On November 17th, Mychael J. Garrett II, a 22-year-old black male, shot a MetroLink security guard at the Wellston Station. Shortly after, Garrett was shot three times by St. Louis County Deputies. The security guard and Garrett both survived. He was never identified in the local media.

On January 23, two black males from East St. Louis shot a man in the abdomen at the Emerson Park Station. The victim was exiting a train when he was shot. The victim survived. He was never identified in the local media.

On March 19th, two male victims were attacked at the Busch Stadium Metrolink Station. They were accosted by a group of black males and females who demanded money. After robbing the victims, 29-year-old victim was pistol whipped in the face. Then they fired a shot, which hit a man in the head as he exited the train. Mac Payne, 57, died of the gunshot wound on March 21st. The local media has not identified what race any of the victims are.

In all three cases, the media seems to withhold information about the victims. The media undoubtedly has copies of police reports that, at the very least, identify what race the victims are.

Last June, there was another major incident at a MetroLink Station. A black female security guard was beaten and hospitalized by a black female perp. In a cellphone video, you can hear several black males cheering and egging on the assault.

Lyda Krewson, a Democrat, is expected be elected the next St. Louis mayor. Her former husband, Jeffrey Krewson, was shot and killed at random by a black male in the parking lot of their Central West End condo. Lyda and their two children, aged 2 and 5, all witnessed the murder. Krewson later married KSDK-TV reporter Mike Owens, and still lives in the same condo.

The current mayor of St. Louis, Francis G. Slay, once physically intervened and stopped a near fatal mob attack. A white male pedestrian had been targeted at random by a large group of black teenagers. St. Louis prosecutors refused to press charges even though the sitting Mayor publicly stated he would testify against them. The St. Louis County Prosecutor at the time was Jennifer Joyce, who once threatened to charge critics of Obama with criminal libel on local St. Louis television.

However, Slay caused outrage in 2014 when he downplayed the racially motivated murder of a white immigrant from Bosnia. Several young black males and a young Latino male beat Zemir Begic to death with hammers. Witnesses say the group yelled “f*ck the white people” and “kill the white people” before the attack. The same group assaulted at least three other white victims. Slay publicly denied that the murder was “racially motivated,” or “related to Ferguson.” The murder was widely seen as part of a string of attacks incited by the media and black racial groups using a fictional account of the Micheal Brown shooting.