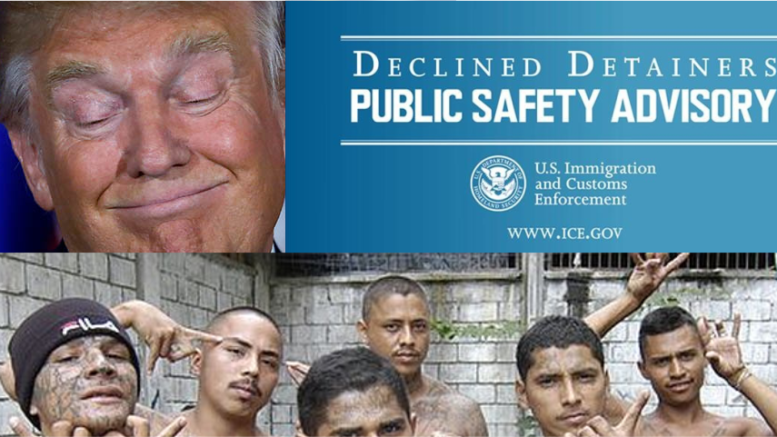 Donald Trump is fulling a promise he made at his speech before the joint session last month. He is fighting back against illegal alien crime and naming names.

ICE has published a report on so-called “sanctuary cities” who are defying Federal orders and refusing to detain violent illegal alien criminals. The report includes a list of illegal aliens convicted or charged with crimes, in which Federal detainers were refused during a one week period. The reports also names dozens of cities and counties that have an official stated policy of refusing to cooperate with ICE. The report is called the Declined Detainers Public Safety Advisory. It appears that the Trump administration intends to publish a new report each week.

Click here for a PDF of the 35 page report.

During the week of January 28, 2017, through February 3, 2017, ICE issued 3,083 detainers throughout the United States. Of those, ICE says there are 157 that they anticipate being refused based on past history of the jurisdiction.

During that same period, 206 previously issued detainers were refused. This means that the illegal alien will not be held for ICE.

Travis County, Texas has an official policy of not cooperating with ICE unless the illegal alien is charged or convicted of murder, aggravated rape, or human trafficking. Over a dozen sexual related detainers were refused. These include “Sex Assault,” “Rape – Strongarm,” “Sex Assault – Carnal Abuse,” “Indecent Exposure to a Minor,” and “Sex Offense Against Child – Fondling.”