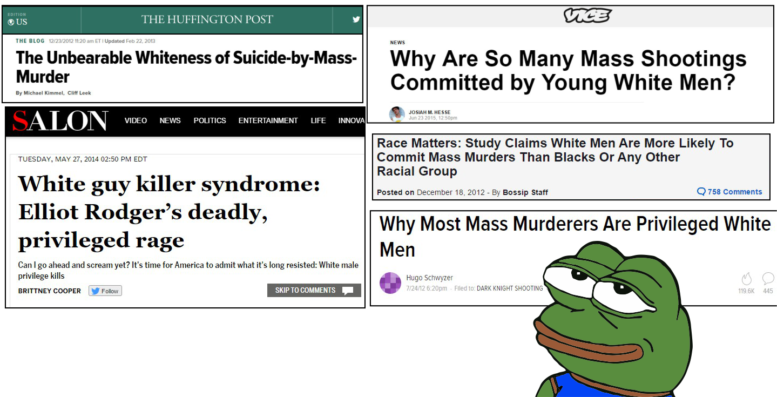 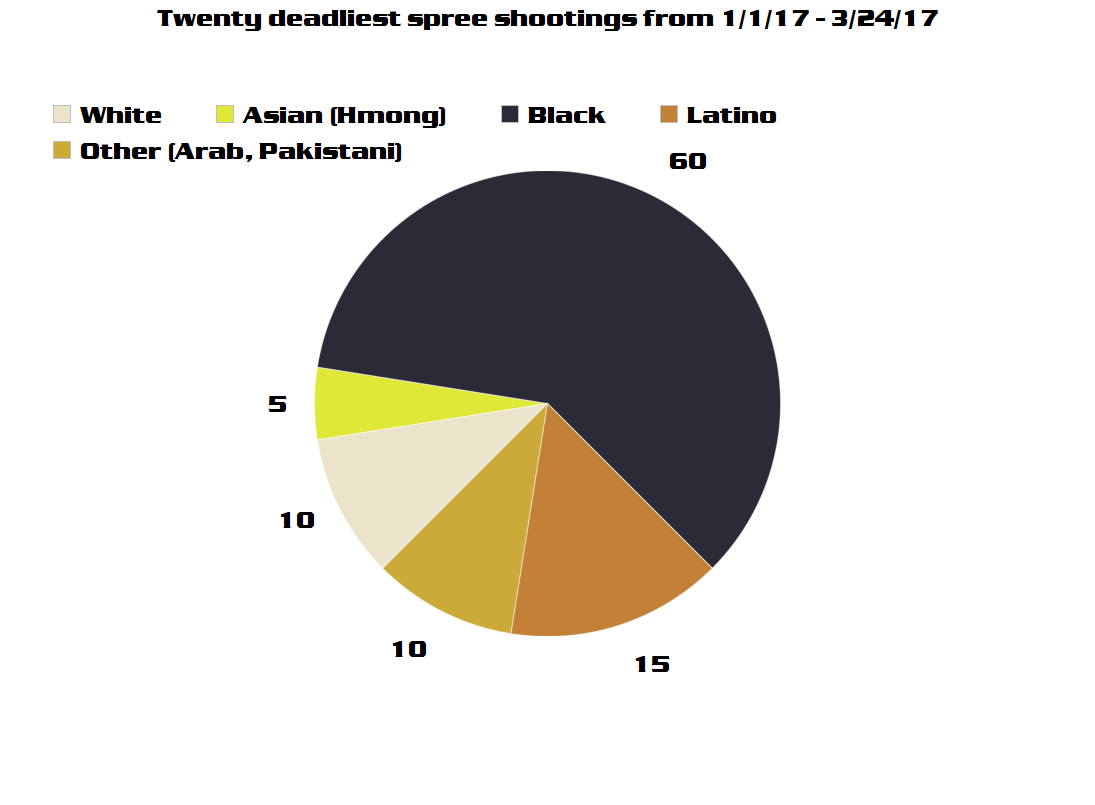 Take a look at these recent headlines. There is a large effort to claim that spree shooters are mostly white males, or that white males are greatly over-represented among spree shooters. This is a complete inversion of reality. The truth is the exact opposite.

It is probably true that the average White or Asian spree shooters averages a higher number of fatalities than the average black spree shooter. However, blacks commit spree shooting in vast disproportion to whites, Asians, or Latinos. It is only when you take the deadliest spree killings over a period of decades that blacks drop off the list. However, even then, white people are still under-represented.

This list is literally ordered by most fatalities. In the case of a tie, the one with the most additional gunshot victims is considered to be worse. We used the Gun Violence Archive to do this research. If you feel a killing should have made this list, but is missing, please e-mail us.

There is a four-way tie for 17th place, giving us an even twenty spree killings. There are no more incidents with two fatalities and two wounded. We decided to publish at an even twenty. We will publish an update in approximately a month from now.

(5, 6) January 6th, Fort Lauderdale, FL. A Latino (Puerto Rican), who claimed online to have converted to Islam, shot 11 people at the fort Lauderdale airport. Five died. All of the victims shown in the news were white. Many of them elderly.

(4, 1) March 15th, Metairie, LA. Two black males and an elderly black female were shot in the head execution style. One white male was stabbed in the head. An unidentified female shot in the face, but survived. The killings took place in two different apartments in an Metairie apartment complex. Police arrested and charged two black males.

(4, 0) February 21st, Toomsuba, MA. A black male shot and killed four members of a black family. One of the victims was only five.

(3, 2) January 21st, Kansas City, MO. Three black males invaded an apartment and shot five people. Three of them died. One of the victims is a white female. Her mixed race two-year old son was shot five times and survived. The other victims have not been pictured in the media.

(3, 1) March 10th, New Orleans, LA. Four members of a black family were shot inside their home. A mother and two of her children died. A third child was injured, but survived. The perp is a black male. No one has been arrested yet.

(3, 1) January 22nd, Atlanta, GA. One or more black males shot four blacks males, killing three. They were sitting in their car at a Checker’s drive-thru.

(3, 1) March 18th, Detroit, MI. A black male kicked open the door to a home and shot four members of the same family. They were sleeping when the attack started. There were a total of six family members in the house, and one returned fire and wounded the perp. Two males and a female were killed. Another female was injured. The victims are black.

(3, 0) March 12th, North Topeka, KS. One or more white males killed three victims inside a home.  A total of five white males have been arrested in connection with the killings.

(2, 2) January 12th, Salinas, CA. Four Latino males where shot. Two of them died. One or more Latino men from a rival gang are believed to be responsible.

(2, 2) January 6th, Pasadena, CA. Black males opened fire at a memorial vigil for a member of a rival gang. They killed two black males, and wounded a black male and a black female. The Pasadena police chief said witnesses immediately refused to cooperate.

If we just went by highest number of people shot, the list would be 70%-80% black. There are a huge number of black spree shootings with more than four victims, but no fatalities. For example, a black male opened fire at a Brownsville, TN homecoming party. Some media reports claim ten people (accounts vary) were shot, but no one died. On January 1st, in Miami, Fl, there were seven people shot in a black on black drive-by with no fatalities. Then on January 16th, there was a black on black shooting in Martin Luther King Jr Park in Miami, FL with eight shot. No one died, however the man arrested was also a suspect in a previous spree shooting but never prosecuted!