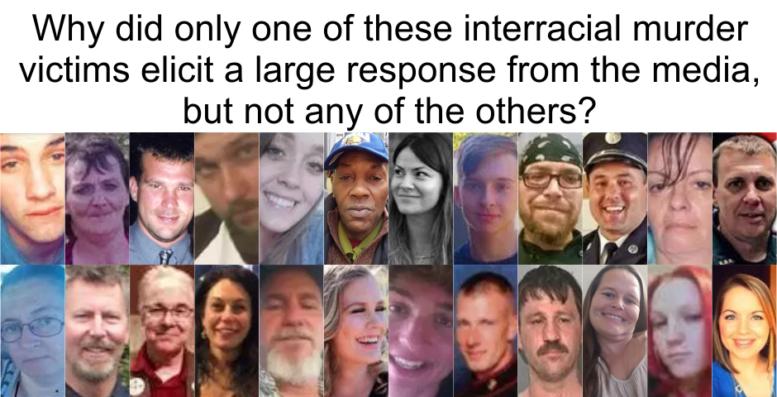 On March 20th, a white male stabbed Timothy Caughman, a black 66-year-old man, to death in New York City. Afterward, he went to a police station and turned himself in. He told police he didn’t like black men and thought he could become famous by killing a black man.

This was an instant national media event, with commentary about race prominently featured in most articles. The New York Daily News called Donald Trump “disgusting” for not publicly addressing it. The mayor of New York City blamed “the rhetoric of Donald Trump” and other Republicans for the murder.

We found two dozen black on white killings that also occurred this month. We can’t find any examples of major media outlets publishing articles about any of these black on white killings, in which there is commentary about race. Most of the time, there no mention of the race of the perp or the victim at all.

No major media outlets published calls for Donald Trump to address any of these black on white killings. No elected officials made public statements blaming the rhetoric of Barak Obama or any Democrats.

We are not trying to downplay the murder of Caughman. We are just stunned by the shocking lack of fairness and balance shown by many major media outlets.

On March 20th, Timothy Caughman, 66, was stabbed to death in NYC, NY. A white male turned himself in and confessed to the murder afterward.

On March 28th, Sheena Engstrom, 28, was shot and killed in St. Louis, MO. The suspect is her black boyfriend. The suspect committed suicide afterward.

On March 27th, David Wilder, 61, was shot and killed in Cleveland, Ohio. Three black males have been charged. Wilder is a local college professor. He was crossing the street when he was killed in a drive-by shooting. The same suspect may have also killed a black teenager.

On March 22nd, Greg “Ziggy” Zyszkiewicz, 64, was shot and killed in Milwaukee, WI. He was working as a home inspector when he was shot. Five black males have been arrested.

On March 22th, Corrina Mehiel, 34, was found tied up and stabbed to death in Washington DC. Police do not think she knew her attacker. A black male from West African has been charged.

On March 21st, Brandon Burrow, 18, was shot and killed in High Point, NC. Police have charged two black males. The shooting took place at a Motel 6. Burrow was shot in the back.

On March 21st, Jennifer Foxx, 34, was found dead in Spring Lake, NC. Her black former roommate has been arrested for her murder.

On March 20th, Kelsey Tennant, 19, was beaten to death. The suspect is a black male who is also suspected of two other murders. Tennant came home from work and the suspect was in her home. Later when Tennant’s boyfriend was attacked and shot at when he came looking for Tennant.

On March 18th, Stephanie Woodard, 34, was shot and killed in San Antonio, Texas. A black male has been charged. Woodard was at a friends house to help her remodel. Her friend was beaten in the head with a pistol. She leaves behind a husband and two children aged 7 and 2.

On March 17th, Jamie Bates, 31, was shot and killed in her home in Lasalle Parish, LA. A black male has been charged. The suspect was invited to stay at the house by one of Bate’s roommates.

On March 17th, Tricia Freeman, 47, was killed in Manatee County, FL. Her adopted daughter’s black boyfriend has been charged.

On March 17th, Travis Brandt, 45, was shot and killed in Memphis. A black male has been charged with first-degree murder.

On March 15th, Harold Frisard, 56, was stabbed to death in his apartment in Metairie, LA. Two black males have been arrested. The same perps also killed three black victims and shot an unidentified woman in the face.

On March 12th, Taylor Brandenburg, 20, was shot and killed in Dayton, Ohio. She was babysitting for her cousin. The cousin and some friends were at a neighborhood bar when a member of their group was attacked by a black male. Then another black male followed the group home and opened fire on them. Brandenburg was exiting the house and shot multiple times.

On March 10th, Harrisburg Fire Lt. Dennis Devoe, was killed responding to a fire in Harrisburg, PA. A black female wrecked into him. Police say she was drunk and driving a stolen car. She fled the scene.

On March 7th, Rocky Wayne Marsh, 38, was beaten to death in Killeen, Texas. Police have arrested three black males and a white female. The murder took place in the parking lot of Marsh’s apartment complex.

On March 7th, Joshua David Lindauer, 33, was shot and killed in Jacksonville, FL. Police have charged a black male.

On March 6th, Sheila Ray Keenan, 45, was beaten to death in Des Moines, Iowa. A black male has been arrested. He is described as an acquaintance.

On March 5th, Allen Ray Plexco, 50, was beaten to death in Fort Worth, TX. A black male has been charged. Plexco was homeless.

On March 4, a white male and two white females were riddled with bullets inside their apartment. The white male invited two black males over to sell them marijuana. Instead, they tried to murder all three and just stole the product. Christian Peck, 21, was killed. One female victim was shot was severely injured with gunshot wounds to the face, head, and shoulder. She miraculously survived. The other female victim was shot in each hand and she thrust her hands in front of her body. Both female victims are local college students.

On March 3, Sam Norman, 51, was shot and killed execution-style while sitting in his pickup truck in Stone Mountain, Georgia. He was targeted at random by a group of black males. Police and media called it an “attempted robbery,” a euphemism for random black on white shootings. He leaves behind four children.

On March 2nd, Charlotte Lahr, 46, was murdered while working in a store she ran in Rochester, NY. The perp is a black male who is a career criminal and had recently been paroled from prison. She was beaten to death.

Special thanks to New Nation News for research.