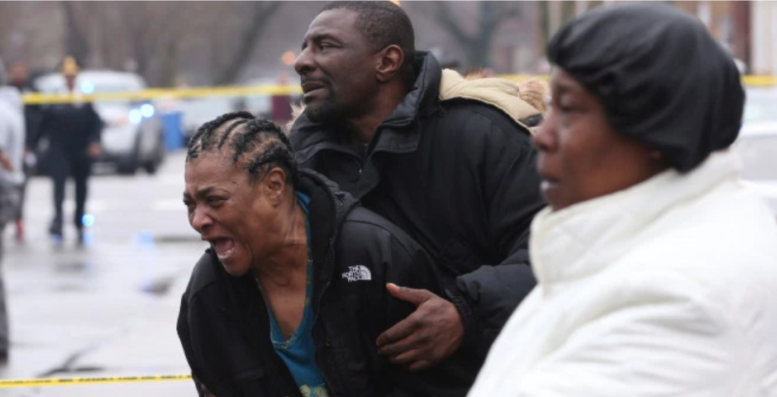 There were three different shootings in one Chicago neighborhood yesterday, including two spree shootings.

All three shootings occurred within an eight block radius and within twelve hours of each other. However, police say they are unrelated. It all took place in South Shore, the childhood residence of Michelle Obama.

At 3:30 PM a shooter walked into Nadia Fish and Chicken and killed two people, Emmanuel C. Stokes, 28, and Edwin Davis, 32. Then two other customers were shot in the parking lot as they fled. Dillon and Raheem Jackson, two brothers, were the victims. Their mother was working at the restaurant and witnessed them being killed through a window. She told police she was suicidal. All four victims were black. The Jackson brothers have a cousin who was shot and killed at a fast food restaurant in 2011.

At 11:00 PM two victims were shot and killed inside their car. The victims are described only as a 27-year-old man and a 23-year-old woman.

In the 1950s, Chicago’s South Shore was a middle/upper-class area with large Greek and Jewish communities. The area made a rapid transformation into a predominantly black area. The neighborhoods famous Greek Orthodox Cathedral was sold to the Nation of Islam and converted to Mosque Maryam in the late 70s. Today it is over 90% black and has 40% fewer residents than it did in the 50s.