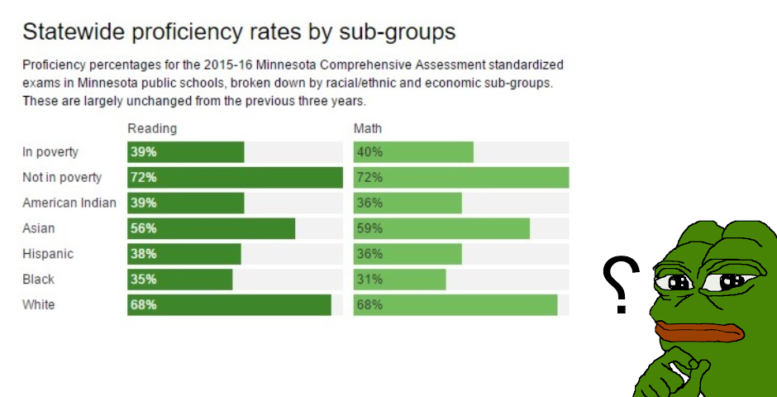 We recently published a two-part report on school funding disparities and academic performance disparities in Michigan public schools. In that state, Asians significantly outperformed all other races in every category. Meanwhile, blacks performed worse than all other races, despite the fact that black students are the most well-funded in the state.

We decided to follow-up by looking at Minnesota because the state is unique for its large Hmong and Somali population.

Asians made up 3% of Michigan, but 4.9% of Minnesota. There are an estimated 66k Hmong, which would make them 1.2% of the state. Hmong children reportedly make up about 2.5% of school children in Minnesota. Almost half of the Hmong population all live in St. Paul. Another very large chunk live in Minneapolis. Hmong are about 70% of the total Asian population in St. Paul.

Minnesota has the largest Somali community in the United States. About 40,000 Somali reside in Minneapolis, St. Paul, St. Cloud, and other nearby cities. The biggest chunk live in Minneapolis and the largest concentration is in the Cedar-Riverside neighborhood. Somali make up about 12% of all the blacks in Minnesota.

Minnesota launched the MCA-III standardized test in math in 2011. In 2012, they introduced the MCA-III for reading. Between 2011 to 2016, racial gaps on all the tests have remained consistent. The scores shown below are the total pass rate for all grades put together. The tests are given to grades 3-8 and 11.

Whites are at the top, followed by Asians, Hispanics and American Indians are about the same, and blacks are at the bottom.

Here we have MCA-III results, broken down by race, for state-wide, Minneapolis, and St. Paul. 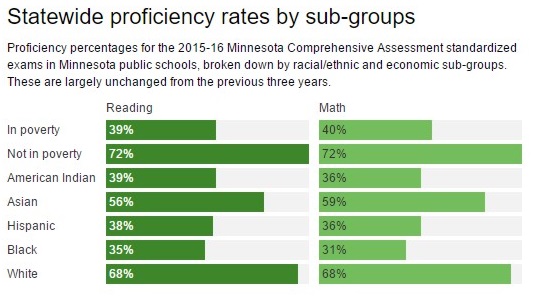 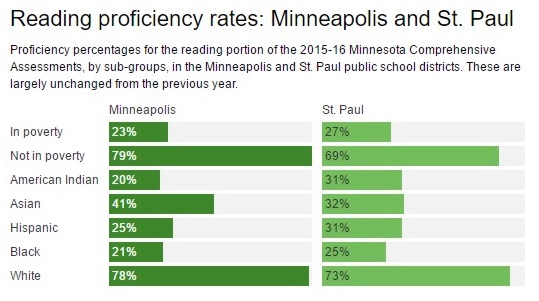 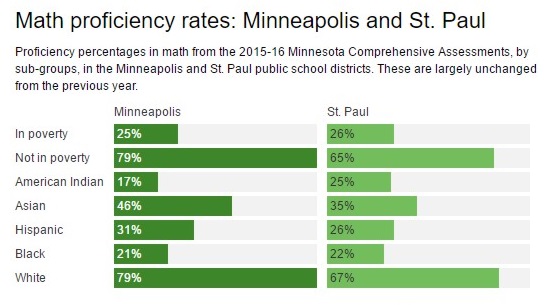 We see a huge drop in Asian scores in Minneapolis and then another huge drop from that in St. Paul. Hmong are greatly under-performing compared to other Asians in the state and around the nation.

Black scores, which are already at the bottom state-wide, fall significantly in St. Paul. Then they fall even more in Minneapolis. Are Somali the reason? 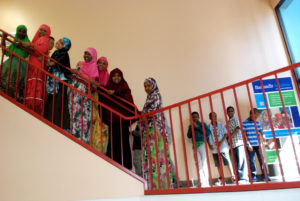 There is a school called Banaadir Academy which is essentially a charter school set up just for Somali. In the 2015-2016 school year it was listed as 99.4% black and 93% “English Leaner.” The school’s proficiency rate for reading was 18.9% and 16.3% in math. These scores fall well below the average for blacks in Minneapolis.

Another possible explanation is the distribution of Mulattoes (half white/half black). In states like Minnesota, there tends to be a higher percentage of Mulattoes among blacks outside of urban areas compared to those who live inside urban areas.

Whites actually performed better in Minneapolis than in St. Paul or the rest of the state.

Minneapolis Public Schools had a budget of $654 million and 36,370 students. This is a staggering $18k per student. Despite such lavish spending, Asians, Hispanics, and blacks all performed much worse in Minneapolis than the rest of the state. The increased academic performance gap can not be explained by a lack of money, since these students got more money than most of the rest of the state.

Note: The Hmong are considered an indigenous people of Vietnam. Most came to America after the Vietnam war ended.