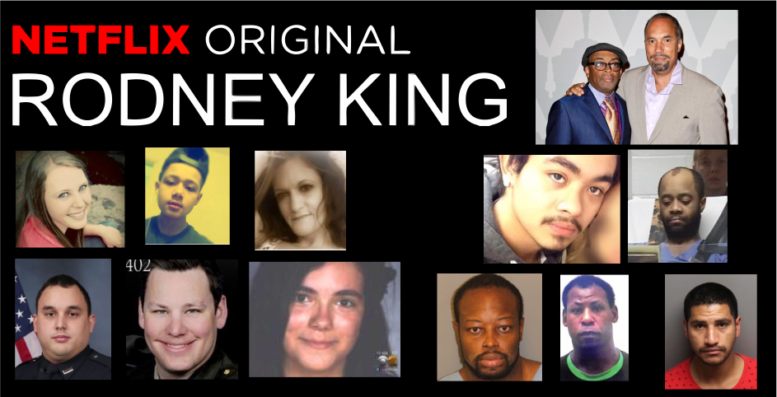 These are seven people killed by five different suspects who were fleeing from police during the first three months of 2017. If you know of any other cases? Please e-mail us and we will add them to the list.

To this day, major media outlets continue to write about Rodney King as if he was doing nothing wrong when police used their batons to subdue him after a chase in 1991. Now Netflix’s is releasing a “Spike Lee Joint” about Rodney King.

If you watch it, keep these victims in mind.

On March 29th, Wathaniel Woods allegedly beat a woman and fired a gun. He also has a laundry list of previous convictions. He fled from police and caused a wreck that killed Police Officer Nicholas Rodman of the Louisville, KY police force. Woods has been charged with murder along with many other crimes.

March 11th, Alex Torrez fled from police in Kentwood, MI. He eventually wrecked and killed his own brother and another female passenger. Torrez survived.

On February 22nd, Alberto Quiroz fled from a California CHIP officer while driving a stolen motorcycle. He caused a wreck that killed Officer Lucas F. Chellew.

On February 16th, police witnessed Donnell Howard steal beer from a gas station outside of Chicago, IL. He fled from police and wrecked into another car. He killed a thirteen-year-old girl and seriously injured her grandmother.

On January 22nd, Courtland Griffin fled from police in Birmingham, AL. Griffin is a career criminal. He wrecked his car trying to flee, which killed two female passengers. Griffin also injured other people in another car. Griffin survived. Griffin survived.