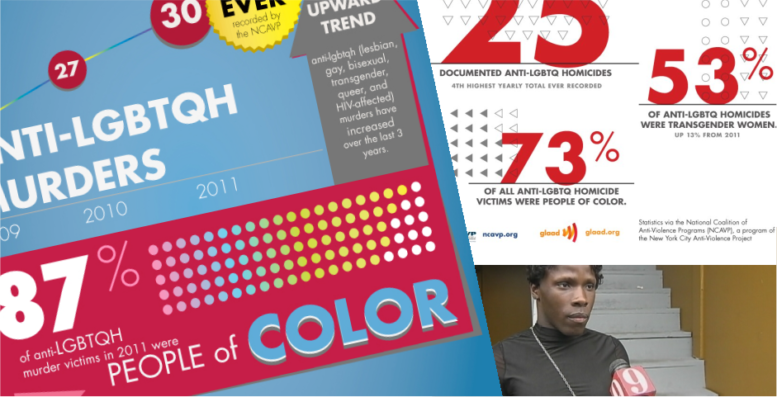 LGBT advocacy groups, Human Rights groups, and liberal non-profits are publishing a huge amount of articles about transgendered women being killed. What is shockingly absent is any mention of who is doing it.

These groups talk about how the murders are “hate crimes” and how they need to be stopped. How are we going to stop them if we don’t know who is doing it?

March 22nd. Alphonza Watson, black, was killed in Baltimore, MD. Police have no suspects. The murder took place in a census tract that is 81% black.

February 27th. Ciara McElven, black, was killed in New Orleans. Police have identified a person of interest who is a black male.

February 25th. “Chyna Doll Dupree” Gibson, black, was killed in New Orleans, LA. Police have no suspect. The murder took place in a 7th Ward census tract that is 95% black.

February 21st. Tiara Richmond, black, was killed in Chicago. There is no suspect. It took place in the Englewood neighborhood, which is one of the blackest in Chicago.

February 19th. Jaquarrius Holland, black, was killed in Moroe, Louisiana. A black male has been arrested for the murder.

January 8th. Demajio “JoJo” Striker, black, was killed in Toledo, Ohio. There is no suspect. It took place in a census tract that is 52% black, 29% white, and 15% Hispanic.

January 4th. Mesha Caldwell, black, was killed in Madison County, MS. There is no suspect. The murder took place in Canton, MS which is about 75% black.

Of the eight victims, seven are black. All seven of these occurred in a majority black areas. While police only have a suspect in one of the seven murders, it is extremely likely that all seven were killed by black males. The eighth victim is an American Indian killed by an American Indian perp.

It seems that the murdered of transgendered women is just one more aspect of the out of control black murder rate.

Six out of the seven murders with a black victim do not have a suspect yet. We already documented that black murder victims are less likely to have a known perp. In the DOJ’s 2015 homicide data, blacks made up 53% of total victims, but only 44% of victims with a known perp. The places were many of these murders took place, New Orleans, Chicago, Baltimore, are already known for their high rate of unsolved murders.

According to GLAAD, there were 27 transgendered women murdered in 2016 and almost all were black. Yet, GLAAD lists “racism” as one of the possible motives! They are intentionally obfuscating what is happening.

The murder of transgendered women is a problem specific to the black community and tied to the fact that blacks are already committing murders in extreme disproportion to their percentage of the population. If GLAAD cares about the victims, why won’t they say this?