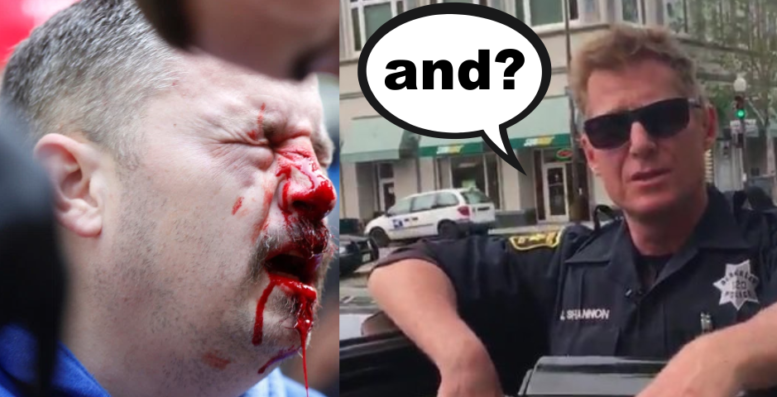 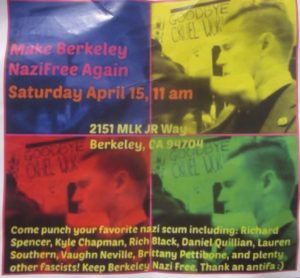 This is an actual flyer that was distributed in Berkeley, CA. It pledges mob violence against both male and female victims.

For the third time, members of the far-left attacked Trump supporters in Berkeley.

It was well-known that Antifa planned to commit large-scale violence. They advertised their intent to beat people up on the internet. There was even a color flyer being distributed in Berkeley that pledged mob violence against seven specific individuals.

During yesterday’s event, and two previous events, there were widespread reports of police backing down and watching people get beaten up from a distance.

However, yesterday the would-be victims showed up ready to fight back. After far-left “Antifa” attacked and injured several people, the crowd fought back. A huge melee involving hundreds of people spilled onto Martin Luther King Jr. Way, a major four-lane road. Antifa could eventually be seen fleeing the area as Trump supporters marched triumphantly down the street.

The Berkeley PD has 170 sworn officers and allegedly borrowed police from Oakland to boost their numbers for yesterday’s event. Various media outlets have reported that between eight and twenty-one people were arrested. So far the Berkeley PD has not released information on anyone that was arrested.

I tell a police officer I’ve been seeing people get beat up all day and they haven’t been around. “Okay, and?” he says. pic.twitter.com/OuGEcvvb8R

I ask a cop why they’ve been hanging back as a brawl is happening half a block away in Berkeley. “I’m not at liberty to discuss my tactics.” pic.twitter.com/teGEYBV1ho