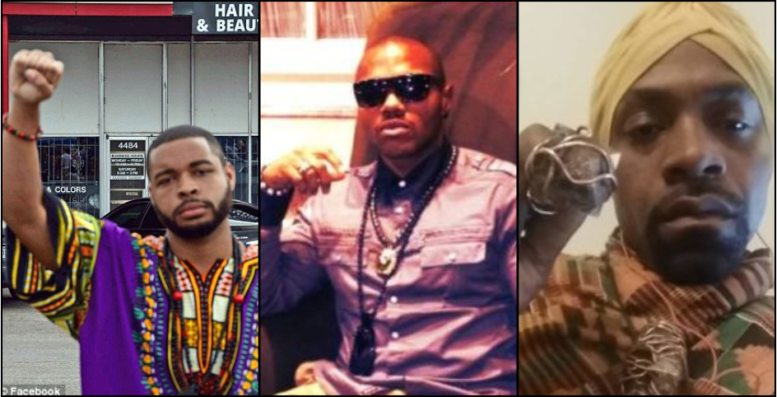 The Nation of Islam [NOI] teaches that Sub-Saharan Africans are the original people to inhabit the earth. White people were created by Yakub, an evil wizard. Since whites are “grafted,” and did not exist in the original creation, they are literal “devils.” NOI teaches that a race war is coming and all white people will be exterminated from the face of the earth. NOI leader Louis Farrakhan says that UFOs will descend from the sky to aid the black race in killing the white race.

Black spree shooters and serial killers have espoused NOI theology since the 1970s with the notorious Zebra Killings in the San Fransisco Bay area.

This bloodbath has continued to this day. In less than a year, there have been three racially motivated spree killings by people who followed NOI theology.

On July 7, 2016, Micah Johnson opened fire on police officers at a Black Lives Matter rally in Dallas, Texas. Johnson killed five people and injured another eleven. All of the fatalities were police officers. It was the biggest loss of police lives in a single incident since 9/11. Police eventually used a bomb disposal robot to blow up Johnson with C-4.

Johnson had stated that he wanted to kill white people, especially white police officers. Johnson was a former member of the New Black Panther Party [NBPP]. This group uses the same theology and was led by former NOI National Youth Minister Khallid Muhammad before he died of a brain aneurysm in 2001 . The NBPP also uses the name New Black Muslim Movement due to legal disputes over the rights to the name “Black Panther.” Johnson attended the NOI run Mohammed Mosque No. 48 in Dallas.

He wrote a very short anti-police manifesto that he e-mailed to a small time rapper in Ohio. Long stated that he had previously been a member of the NOI in youtube videos.

On April 18th, 2017, Kori Ali Muhammed killed three random white men and injured a fourth in Fresno, CA. Police say he was motivated by racial hatred. On Facebook he makes very clear references to NOI theology. He calls white people “yakub’s grafted white devils” and refers to blacks as the “Asiatic Black Nation.” Yakub is exclusive to NOI theology and has never existed in any other version of Islam.

Muhammed yelled “Allahu Akbar” when he surrendered to police. This is a common Muslim saying, which the NOI also uses. His birth name was Kori Taylor. Many Nation of Islam followers change their names to Islamic names.