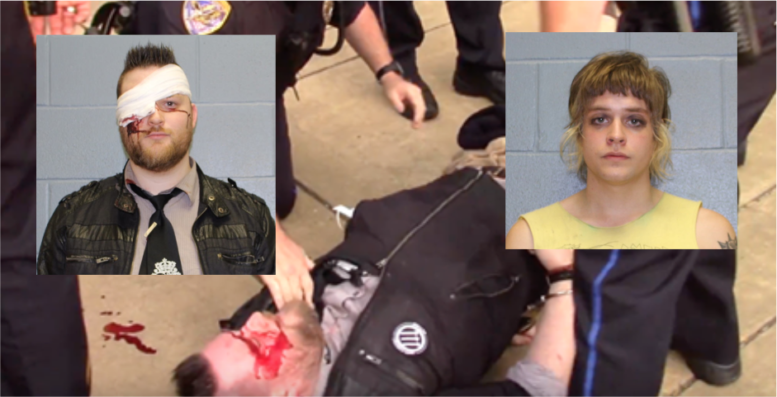 Hansen bragged on Facebook about hitting King with a padlock.

Auburn police made three arrests while Richard Spencer was speaking at Auburn University yesterday. All three were charged with misdemeanor disorderly conduct and released with a court date.

A video shows what appears to be Waldon leading a mob attack on King. Hansen, who is a transsexual, hits King with a padlock tied to a rag. He even bragged about it on Facebook immediately after the police released him.

There are multiple videos. Waldon, who is fairly large, walks over to King, who is standing by himself. Then Waldon repeatedly chest butts the skinnier man until King throws an elbow in self-defense. Waldon chases King and puts him in a headlock. While King is being hit with fists and a padlock, he pounds on Waldon’s face to try to get free.

Waldon is left with blood pouring out of his face. King has a small mark on his face in his mugshot.

The “woman” (?) attacking uses a towel with padlocks, making it a pretty decent “concealed” weapon.#Auburn pic.twitter.com/uxB0nXUSPw