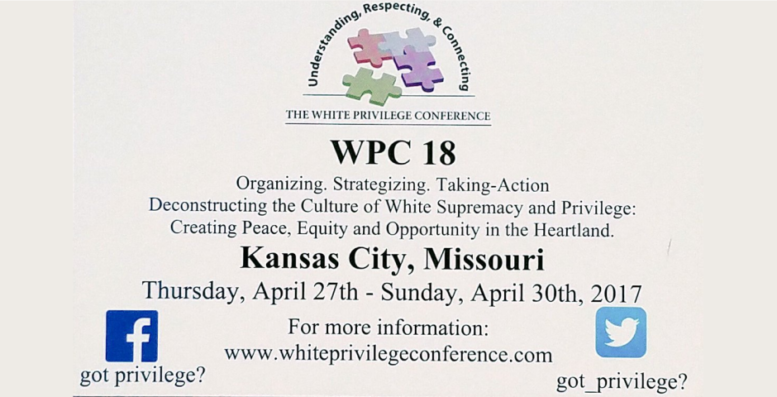 The conference begins April 27th and concludes April 30th. Registration costs $400 in advance or $450 at the door. Teachers and college students pay between $225 and $310.

It is held at the Downtown Marriott. Organizers allege that between 2,000 – 2,500 people will attend. Various colleges and public school district offer incentives for their employees to go. The University of Wisconsin is offering continuing education credits. Avila University of Kansas City is a sponsor and undoubtedly offering some kind of incentive for employees and students to go.

Michael Eric Dyson, a black male who is a is a professor of Sociology at Georgetown University. He is also a former radio host and an analyst for MSNBC. Last January Dyson said white people need to start “Individual Reparations Accounts” and give away money to black people “to atone for slavery and racism.”

Amer Ahmed, a Muslim immigrant and self-described “hip-hop activist.” He has held positions at various colleges as a diversity officer.

Jacqueline Keeler, an American Indian woman who is a famous anti-mascot activist.

The names of the conference session are not posted online. During the 2014 White Privilege Conference, the session names were posted online by one of the sponsors.

1) Climate-Change-Mind-Set: Replacing White Liberalism with Racial Justice As Our Communities Organize in Response to Climate Change 2) Resisting the Internalized Trickster: No Limits to What We Can Do! 3) A Critical Dialogue – Poverty, Race and Education: What does this mean for Education Degree Programs in Institutions of Higher Learning? 4) Where are all the White People? Strategies for engaging white people in racial justice 5) Practical Solutions of How the Social Justice Activist & the Institution can develop Collaboration to Dismantle White Privilege 6) White Privilege in the Schoolhouse: Breaking Habits of Complicity in Maintaining White Dominance