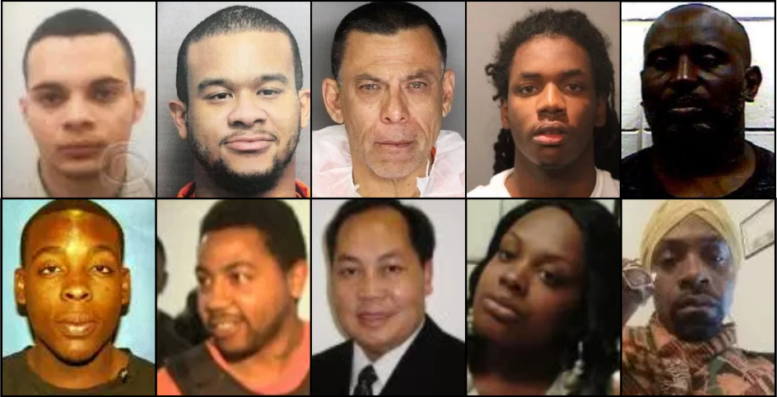 Note: There are different definitions being used for the term spree shooting. We are talking about any multiple victim shooting.

Of the thirty-five deadliest shootings, twenty-six were committed by blacks, four by Latinos, two by whites, one Hmong, one Pakistani, and one Arab.

Two of the spree shootings were black men that killed a white girlfriend along with members of her family. We actually documented a total of three such killings, but only two made this list.

This list is literally ordered by most fatalities. In the case of a tie, the one with the most additional gunshot victims is considered to be worse. We used the Gun Violence Archive to do this research.

(5, 6) January 6th, Fort Lauderdale, FL. A Latino (Puerto Rican), who claimed online to have converted to Islam, shot 11 people at the fort Lauderdale airport. Five died. All of the victims shown in the news were white. Many of them elderly.

(4, 1) March 15th, Metairie, LA. Two black males and an elderly black female were shot in the head execution-style. One white male was stabbed in the head. An unidentified female shot in the face, but survived. The killings took place in two different apartments in a Metairie apartment complex. Police arrested and charged a black male who is a local cocaine dealer.

(4, 0) March 23rd, Sacramento, CA. A Latino male killed two adults and two juveniles. The victims are Latino and members of the same family.

(4, 0) February 21st, Toomsuba, MA. A black male shot and killed four members of a black family. One of the victims was only five.

(3, 2) January 21st, Kansas City, MO. Three black males invaded an apartment and shot five people. Three of them died. One of the victims is a white female. Her mixed race two-year-old son was shot five times and survived. The other victims have not been pictured in the media. Police have still not made any arrests.

(3, 0) February 5th, Jupiter, FL. A white male murdered three white victims. The perp was selling drugs and guns. There were one or two accomplices. Another white male has been charged as an accomplice.

(3, 0) April 24th, Savanah, GA. Three people were shot and killed inside a home. A black male has been arrested for the murders. The victims are two black males and a black female.

(3, 0) March 12th, North Topeka, KS. One, or more, white males killed three victims inside a home.  A total of five white males have been arrested in connection with the killings.

(2, 4) April 2nd, Chicago, IL. Multiple black males got out of a car and opened fire on a group of black male victims.

(2, 2) January 12th, Salinas, CA. Four Latino males were shot. Two of them died. One or more Latino men from a rival gang are believed to be responsible.

(2, 2) January 6th, Pasadena, CA. Black males opened fire at a memorial vigil for a member of a rival gang. They killed two black males and wounded a black male and a black female. The Pasadena police chief said witnesses immediately refused to cooperate.

Obvious, the raw data paints a vastly different picture than what is reported by CNN and MSNBC.

If we just went by the highest number of people shot, the list would be even blacker. Blacks commit spree shootings in extreme disproportion to their share of the population. The only time that blacks drop off the list is when you look at spree shootings, with very high death tolls, over a long period of time.