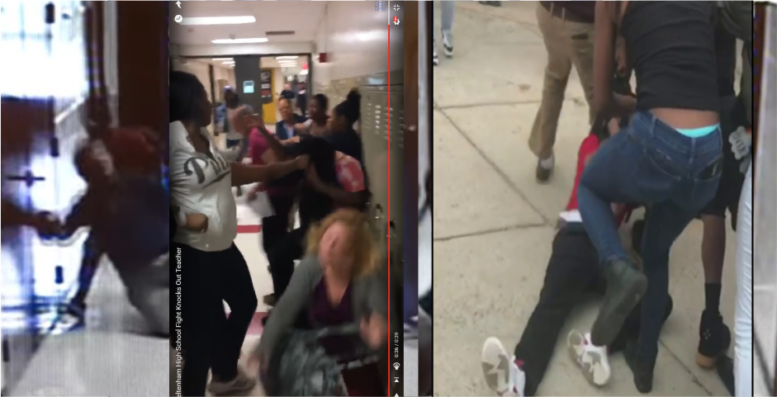 We just covered the shocking videotaped mob violence at a Middle School in Plantation, FL on April 18th. That resulted in a school administrator with a sprained shoulder and a sprained wrist. Another female teacher was violently shoved over and over. Three black male students are being charged with felonies.

What if we told you that was only the beginning?

On May 2nd, a teacher at a Wyncote, Pennsylvania Public School was attacked and hospitalized. Numerous black females were involved in a mob fight. A white female teacher tried to break it up and was elbowed in the temple. She was knocked unconscious and said to be badly injured. The local media says fighting is occurring daily at the school. It took place at Cheltenham High School, which is 54% black.

On April 28th, a male teacher at a Charlotte, North Carolina public school was beaten and hospitalized. A large group of black males and females were involved in mob violence. A white male teacher tried to break it up and was attacked. It took place at West Mecklenburg High School, which is 62% black. According to local media, this is a common occurrence at this school. Seven different staff members were assaulted last year alone.

On April 5th, a Salisbury, Delaware public school teacher was hospitalized with a brain injury. She was attempting to stop a mob fight involving black students. Six students were arrested by police. It took place at Choices Academy, which is a special school for students that have performed poorly at other schools.

On March 28th, a female 11th-grade student beat and hospitalized a female teacher. The student is being charged with assault, but only as a juvenile. The mother of the perpetrator defended her daughter and blamed the teacher. It took place at Douglas High School, which is 93% black.