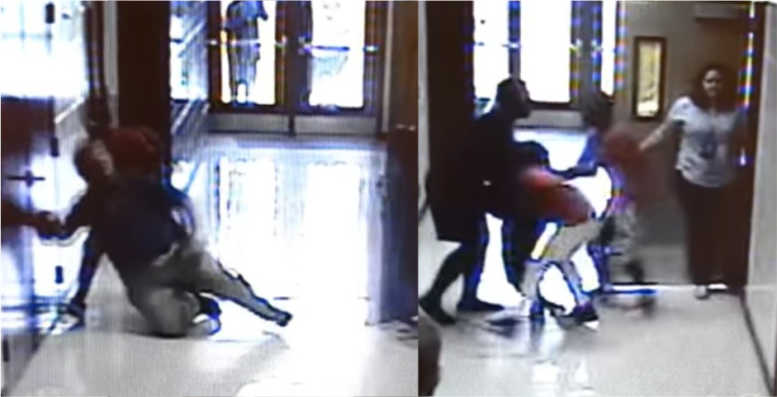 On April 18th, there was an episode of mob violence inside the Seminole Middle School in Plantation, Florida. Three different students are being charged with felonies.

The school has released surveillance video of the incident and it is unbelievable. The video begins with a black male roaming the hallway and then violently forcing his way past a female teacher and into a classroom. Then, several black male students beat each other up in the hallway for over two minutes. Different participants enter and exit the classroom the entire time. The teacher is repeatedly shoved out of the way. Some of them even stop fighting to get drinks from the drinking fountain and then return to fighting.

After a while, an adult male arrives at the scene. When the fighting seems to have stopped, he turns his back to two remaining perps. One of them immediately moves in behind him and snatches his keys. When he tries to pursue that perp, a second perp attacks him and pulls him to the ground.

The male victim is Mark McConnell, a white school board employee. He suffered a sprained wrist and a sprained shoulder. The female adult is Jacklyn Rivera, who says she was repeatedly shoved during the incident. Rivera appears to be either white or Latino.