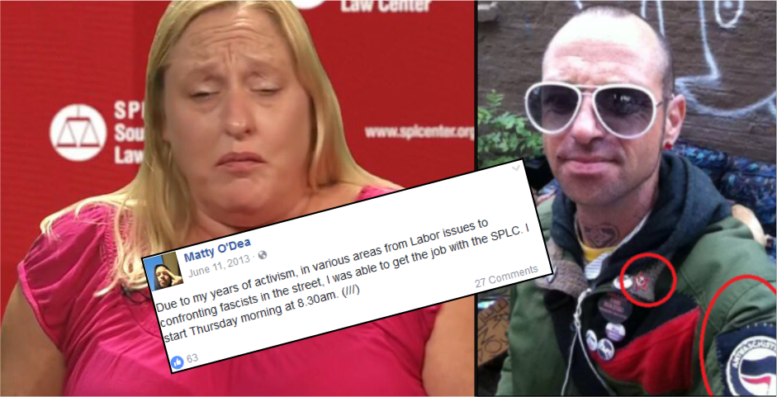 The Southern Poverty Law Center [SPLC] has been casually supporting Antifa for years. They have interviewed Antifa leaders and linked to Antifa websites. They defend, excuse, and openly romanticize Antifa violence. A well known Antifa leader even co-starred in a documentary that was jointly made by the SPLC and MSNBC called “Erasing Hate.” 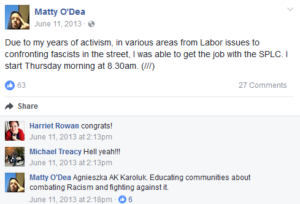 The documentary was exposed as fake and completely discredited.

The SPLC has long been accused of being directly involved in Antifa. However, there was no real evidence. Until now…

Matthew “Matty” O’Dea openly identifies as a Communist and a member of the militant group Industrial Workers of the World [IWW]. He openly advocates violence, has a criminal history, and a prison tattoo on his face.

He also identifies as an employee of the SPLC. Or at least he stated that he had just been hired by the SPLC on June 11th, 2013. O’Dea explicitly claims that the SPLC hired him because of his violent street “activism.” 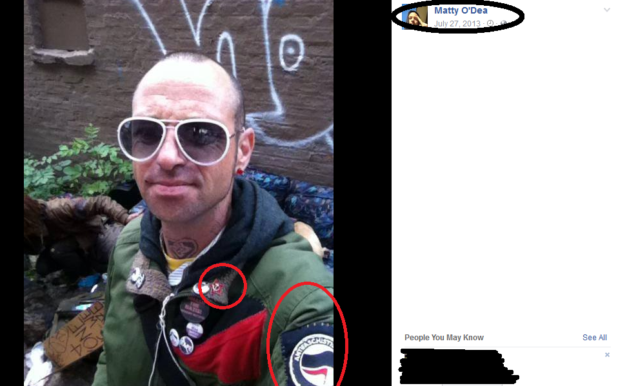 O’Dea sporting Antifa patches just weeks after he says the SPLC hired him.

In July of the same year, O’Dea posted a picture of himself wearing two different Antifa patches and a pin with a hammer and sickle. He posted another picture of himself sitting at a booth for the IWW selling Communist literature and coffee mugs.

The IWW is closely associated with Antifa and many the IWW members double as Antifa at demonstrations. O’Dea was living in Chicago when he says he was hired by the SPLC. Antifa is classified as a criminal gang by the local Cook County Sheriff’s department.

Last month, the same O’Dea posted a message on Facebook alleging twenty years of involvement with militant groups. He publicly called for an escalation of violence among Antifa members.

O’Dea has a “three dot” prison tattoo next to his right eye. The meaning of this tattoo is that you have served time. It is not associated with any particular prison gang, but a universal symbol. People with the tattoo will commonly say it stands for “gang life,” “crazy life,” “thug life,” ect.

O’Dea currently lives in Wisconsin, where he appears to be the ringleader of a local Antifa cell. The man in the video below wears a mask but you can still see part of the tattoo and other telltale signs that it is O’Dea.

If O’Dea is telling the truth about being hired by the SPLC, then this is a smoking gun. It would prove that the SPLC is not just casually supporting Antifa, but directly involved with the violent far-left extremists.

There are also rumors about the high-profile SPLC employee Ryan Lenz. He is a pale complected, bearded hipster who claims to be “Native America.” He is widely rumored to be involved with Antifa. However, no conclusive evidence has emerged yet.