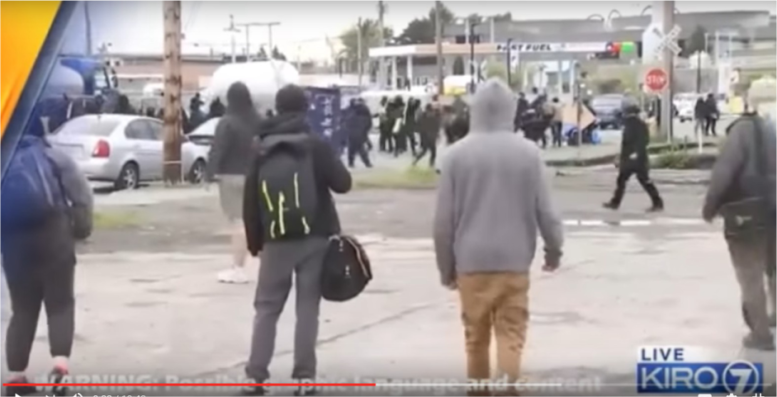 UPDATE: We got more information about the nine Antifa charged with felonies. We found three of their Facebook profiles. Details at bottom.

A lot has been written about the Antifa May Day march in Austin, TX. Video footage shows Antifa cowering from a much smaller group of Trump supporters. The footage is so bad that the official website of the Austin Antifa publicly admitted defeat.

However, Antifa suffered an even more humiliating defeat in the liberal city of Olympia, WA on the same day.

About fifty or so Antifa blocked a downtown intersection while holding homemade shields and plywood banners. Pedestrians are milling around, but no one is bothering them. When Antifa gets ready to start their march, they leave a huge pile of garbage in the street.

Pedestrians start yelling at Antifa to pick up their trash. None of the people look like right-wing Trump supporters, it is just a local pedestrians. Some of them refer to themselves as “street people.”

Antifa responds to cries of “pick up your litter” by unleashing a barrage of pepper spray at the pedestrians.

The police initially rush in and break up the two sides. However, shortly after, the police stand down and allow the locals to do whatever they want. The two sides hurl objects at each other as the mass of Antifa keeps backing away. In a short amount of time, the mass of Antifa break formation and flee from a group of about eight guys.

However, Antifa re-grouped in a different part of the city where they retaliated by going on a vandalism spree. They smashed the windows of two banks, a Starbucks, and a Goodwill store. Police finally moved in and arrested nine people. Five women and four men are being charged with felonies.

Note: The list of mugshots at the end of this video is not the correct mugshots. They do not even appear to be from the same city. The relevant parts of this video go from minute mark 2 through minute mark 15.

All nine have been charged with 1st-degree malicious mischief. This is a Class B Felony with a penalty of up to ten years and $20,000 in fines.

Maria Gardner Listed as Marcus Gardner by Olympia PD. Referred to as “Maria” at bond hearing. Hours before this person was arrested and spent the night in jail, he/she posted “where should I sleep tonight” on Facebook.

These are pictures of weapons confiscated from Antifa by the Olympia, WA police. The police posted them on twitter.