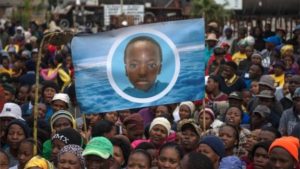 The EFF is depicting the 16-year-old thief as a small child.

Hundreds of black South Africans have been rioting in the city of Coligny. The Economic Freedom Fighters [EFF] appears to be at the forefront of agitating the black community in Coligny.

EFF is a Marxist-Leninist “Revolutionary Socialist Party” that advocates the confiscation of white-owned land and companies.

At least three homes have been set on fire and multiple businesses looted. The homes and businesses are owned by whites and East Indians.

The violence is being justified using the death of a sixteen-year-old thief. Two farmers apprehended Matlhomola Moshoeu on their property. They were transporting him to the police station when he leaped out of their truck and died. The EFF is demanding that the two farmers, Pieter Doorewaad and Phillip Schutte, be charged with murder.

The riot was launched after the two men were granted bail.

EFF is inflaming the crowd using a picture of the perp from when he was a small child. Americans following the story can’t help but point out the similarity with the Trayvon Martin case, in which media used very old childhood pictures to incite outrage.

South Africa is in danger of collapsing into a sea of violence. There is widespread racially motivated violence against white people. There are re-occurring anti-immigrant riots where native-born black South Africans attack foreign-born blacks. Many believe the conflict between ANC and the EFF could become an armed civil war at any moment.