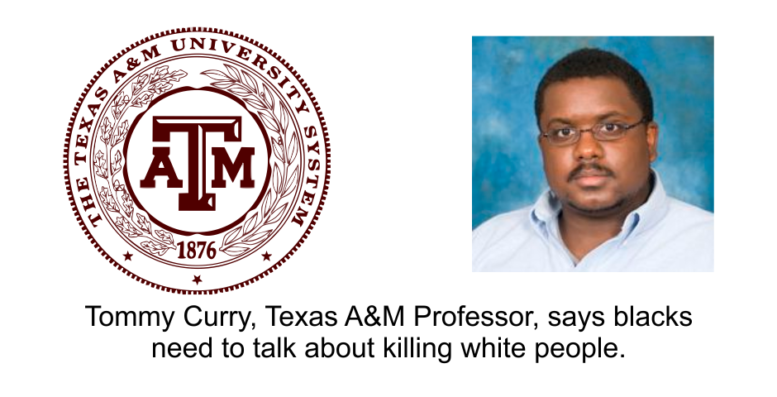 UPDATE: Texas A&M president Micheal Young has issued an official statement where he shrugs off the murderous comments made by Curry. In fact, Young does not even mention Curry by name.

Tommy Curry is a professor at Texas A&M. Curry teaches “Radical Black Philosophies” and “Social and Political Philosophy.” He advocates “Critical Race Theory.” This is a black nationalist version of Marxist Critical Theory.

Among other things, Curry says that black people should talk openly about murdering white people. In a youtube interview, he says that the murder of white people may be necessary for “black liberation.” Further, he suggests that white people need to fear blacks so much that they believe “death could come for them at any moment.”

Currently, interracial murders in the USA involving blacks and whites are extremely one-sided. Most are black against white as it is. What Curry seems to be talking about is a planned mass murder on a large-scale. Curry is highly active on youtube and has many other anti-white diatribes.

Tommy Curry has published two books, which his students presumably have to purchase when they take his classes. The Philosophical Treatise of William H. Ferris, which retails at $125.00 and The Man-Not, which retails at $99.50. The first book appears to be a collection of other people’s work. Students can opt for a kindle version for $34.50.

Less than two weeks ago a black nationalist at nearby UT-Austin went on a racially motivated stabbing spree. He stabbed three whites and one Asian. One of the white victims died.

In 2011, an African immigrant named Nkosi Thandiwe went on a racially motivated shooting spree in Atlanta. He shot three young, beautiful white females. One was killed and one was left paralyzed. During his trial, he said he felt justified in shooting white people because of what professors taught him at a local community college. 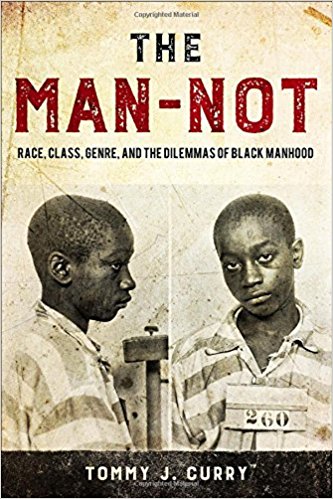 Here is the summary of Tommy Curry’s book The Man-Not:

Tommy J. Curry’s provocative book The Man-Not is a justification for Black Male Studies. He posits that we should conceptualize the Black male as a victim, oppressed by his sex. The Man-Not, therefore, is a corrective of sorts, offering a concept of Black males that could challenge the existing accounts of Black men and boys desiring the power of white men who oppress them that has been proliferated throughout academic research across disciplines.

Curry argues that Black men struggle with death and suicide, as well as abuse and rape, and their genred existence deserves study and theorization. This book offers intellectual, historical, sociological, and psychological evidence that the analysis of patriarchy offered by mainstream feminism (including Black feminism) does not yet fully understand the role that homoeroticism, sexual violence, and vulnerability play in the deaths and lives of Black males. Curry challenges how we think of and perceive the conditions that actually affect all Black males.