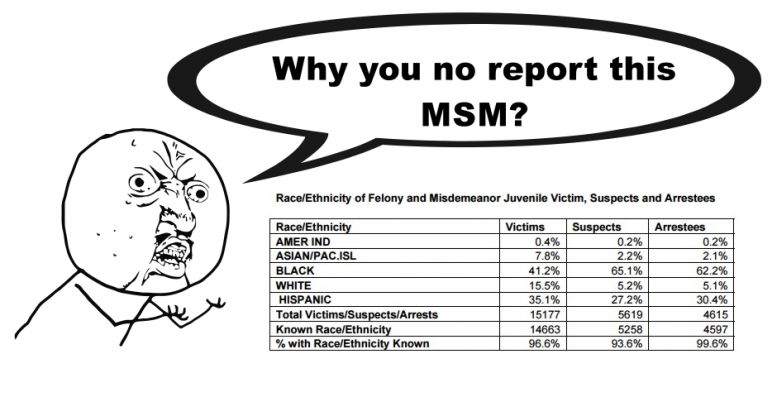 Let us start by looking at the racial makeup of NYC. Note that blacks make up 22% of the city and Hispanics make up 29.1%.

The data in the NYPD report is at complete odds with the popular narrative put forth by the media and the black grievance industry. We are often told that the reason so many blacks are in the criminal justice system is because they are being disproportionately targetted by police for minor crimes.

We can see that in NYC, the exact opposition is true. Take a look at misdemeanor criminal mischief. Black are by far the least likely of any race to be arrested when the commit an offense. Blacks made up 47.6% of suspects, but only 40.6% of the suspects arrested. For petite larceny, 51.1% of suspects were black, but only 43.7% of the people arrested were black.

Black suspects were substantially less likely than suspects of other races to be arrested for grand larceny and robbery as well.

The same trend we see with minor crimes basically continues all the way up to murder. Blacks who committed murder in NYC were the least likely to be arrested.

91.4% of all murder suspects are black or Hispanic. Large percentages of white and Asian murder victims are killed by a member of another race.

Please view the NYPD’s report for yourself. There is a lot more information.