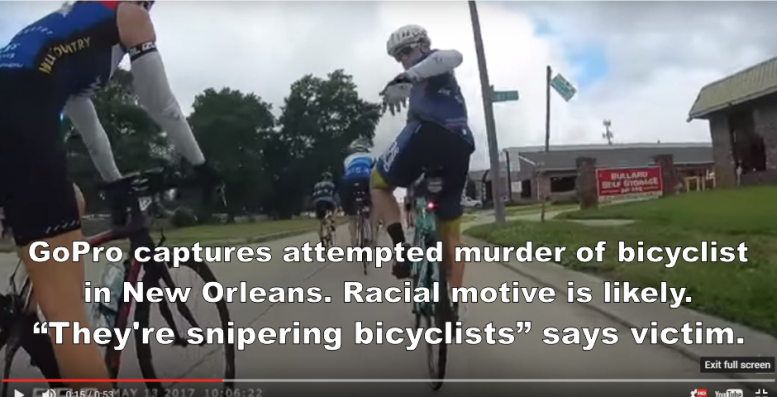 A group of ten white males and females were riding bicycles through a black neighborhood in New Orleans when one member of the party became a victim of attempted murder. Christopher Weiss was hit in the back with a bullet. They were riding near Lake Ponchtatrain at 10:30 AM Saturday.

However, Weiss was not even surprised he was attacked. He told the local newspaper “they’re snipering bicyclists.” He says other bicyclists have been hit by paintballs. Weiss also says he already bashed in the head and robbed while riding his bike in New Orleans once before.

One of the members of Weiss’s party was a doctor. Police disagreed with the doctor’s assessment and said it was just a BB. This strongly suggests that police are used to seeing bicyclists getting hit by BBs as well. In fact, the NOPD issued statement claiming it was only a BB and the retracted the statement after surgeons at University Hospital removed a bullet.

In fact, just two weeks ago, the city of New Orleans passed an ordinance saying it is illegal to “harass, taunt, or maliciously throw objects” at a bicyclist. Dan Favre, executive director of cycling advocacy group Bike Easy, says he had a soda can thrown at him three weeks ago. Favre is a white male. 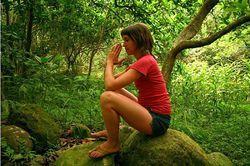 Kirsten Brydum was murdered at random while riding her bicycle in a black neighborhood in New Orleans in 2008.

The most notorious attack on a bicyclist was the murder of Kirsten Brydum in 2008. She was a beautiful young white female from San Fransisco. She wrote on the internet that she was traveling the country to campaign for Barak Obama. Brydum was murdered at random while riding her bicycle through a black neighborhood in New Orleans. Nothing was stolen. Hours later, a city work crew spotted her on the sidewalk with her bicycle still laying next to her body. No one in the neighborhood even bothered to call the police.

The NOPD issued a statement saying “robbery does not appear to be the motive.” Her hometown newspaper, the far-left San Fransisco Chronicle, then published a fake story claiming she had been killed in a robbery.

New Orleans is currently dismantling four Confederate statues and open racial hostility against white people is at a peak.