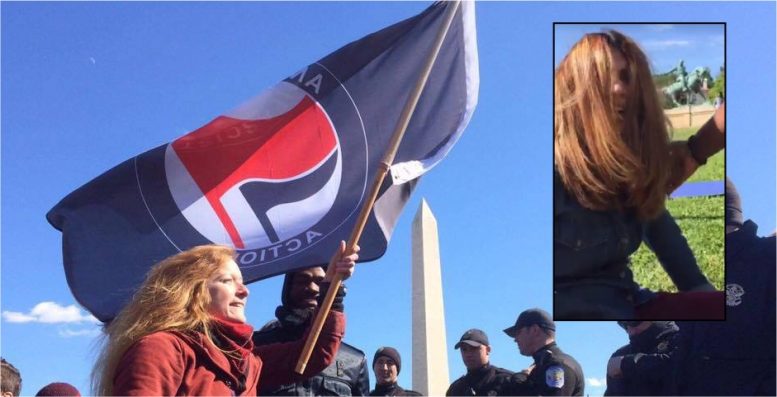 In Europe and North America, many Antifa groups hero worship armed Kurdish Marxists like the PKK and YPG. A month and a half ago this website predicted that German Antifa will eventually find themselves being attacked by Turks, due to their alliances with militant Kurdish groups.

Well, seems we were right on the money. We don’t even have to look at Germany. A high profile female Antifa leader was just savagely pummelled by Turkish men in Washington DC.

Lacy MacAuley joined a group of Kurdish men and women who were protesting the DC visit by Turkish president Erdogan. A large group of Turkish men beat them without mercy. Many of the attackers were wearing suits. Turkish media is reporting that members of Erdogan’s own security team are among the attackers. There were actually two attacks. One occurred in front of the Turkish Embassador’s residence and then two hours later protesters were attacked a second time outside the Turkish Embassy.

Nine people were injured and treated by paramedics or taken to hospitals. One was seriously injured. Two people were arrested for assaulting a police officer.

MacAuley was holding a sign that read “Erdogan = Fascist.” She stated on twitter that her sign was ripped up and she was physically assaulted. MacAuley also alleges that she was manhandled by police after being attacked. She filed a police report along with other people she says were victims. This occurred at the second attack near the Turkish Embassy. She claims that the perpetrators were members of Erdogan’s security team.

Macauley posted a video on youtube in which you can tell a woman is being attacked, but you can’t really see anything. There is a photograph that appears to show MacAuley dazed and sitting on the ground.

Lacey MacAuley is a professional community organizer for multiple far-left foundations. She also describes herself as “Antifa” and has organized Antifa protests. She is often seen with violent, masked Antifa at events. The banner for both her Facebook and Twitter accounts is a picture of her holding an Antifa flag. Currently, MacAuley is trying to rally Antifa to come to Tennesse to protest the American Renaissance Conference in July.

Lacey MacAuley says this is her being attacked: