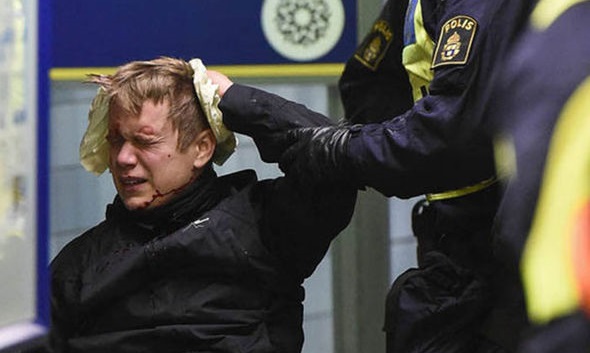 Rioting in Rinkeby began Monday evening and continued all night long. Muslim immigrants torched cars, smashed storefronts, and battled with police. Eventually Swedish police fired rare live rounds to get the rioters to back down. It does not appear that any rioters were actually hit with bullets.

Sylvia Odin, a spokesman for the Stockholm police, says that live rounds were fired because the rioters were pelting police with rocks. “There was stone throwing and they were placed in a situation where a number of people jointly attacked and threw stones. They felt vulnerable and threatened.” Odin says that the live rounds went beyond warning shots and also targeted a specific perpetrator.

A Swedish photographer for the newspaper Dagens Nyheter was brutally beaten and hospitalize. He says he was attacked by about fifteen perps who beat and kicked him. According to Dagens Nyheter, the police would not even transport their injured photographer to the hospital. He had to get there by himself after police declined to provide aid. At least three police officers were also hospitalized.

It was originally reported that police only arrested three rioters. Now the Swedish media has published a statement from District Police Commissioner Jan Evensson saying that zero rioters were arrested.

On Saturday, Donald Trump made an off the cuff remark, referencing immigrant crime in Sweden, at a Florida rally. He was then attacked by the media. The Washington Post called Trump’s remark a “dubious claim.” Socialist politicians in Sweden then pretended to be confused over what Donald Trump was talking about. Now Trump’s off the cuff remark sounds almost prophetic.