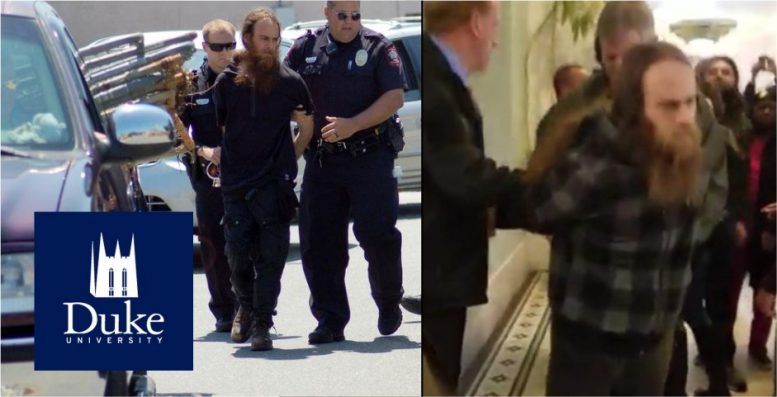 Over the weekend there was a Confederate memorial rally in the small city of Graham, NC. The local “wobblies” vowed to show up and shut down the event. The “wobblies” are the Industrial Workers of the World [IWW]. Few, if any of the members are actual industrial workers. They are, usually, the exact same people who also call themselves “Antifa.”

In fact, the “wobblies” were yelling class-based insults at people with Confederate flags. Accusing them of being poor and living in trailers, being “trailer trash,” having “dirt floors,” ect. They did not exactly seem sympathetic with working class people.

Antifa/IWW did try to attack some people before the rally started. Police say that a Christian flag was ripped away from a man who arrived at the rally site early. The perps were in the process of opening a bottle when police intervened. The cops believe the bottle contained something flammable to burn the flag with. Three people were arrested.

Sounds like typical Antifa, except here is where the story gets crazy! One of the men charged is Rann Bar-On, a mathematics lecturer/visiting faculty member at Duke University. He is in the USA on a sponsored green card and this is at least the second time he has been arrested in the USA since March. One of the other men charged is Gregory Southall Williams, who is a Duke graduate student and Bar-On’s research assistant.

Williams was present when Bar-On was arrested for disrupting the Durham County Commissioners meeting last March. Williams identifies as Jewish but is also an outspoken “anti-Isreal” activist. He was arrested in Connecticut in 2015 for disrupting a pro-Israel event at a synagogue. Bar-On, an Israeli Jew himself, is hostile to Israel and promotes Palestinian causes.

Bar-On and Williams are both featured in photographs of local IWW members. They are also identified as members of the “Triangle Chapter” of IWW in a local newspaper. The leading Antifa website in the USA, IGD, is fundraising for bail for the two.

Duke University is harboring a foreigner who has been arrested twice in the past three months. Both times for allegedly using violence to attempt to suppress the free speech of American citizens. There is no excuse for Duke to employing such a person.

Duke appears to be ground zero from which the entire Marxist/Antifa/IWW scene in the central region of North Carolina is emanating from. Click here for more information.

Related: This is the exact same area of North Carolina, the so-called “triangle,” where a GOP office was firebombed last October. In fact, the office is only eleven miles from Duke University. The perpetrators spray painted “Nazi Republicans Leave Town or Else.” So far, no one has been arrested.