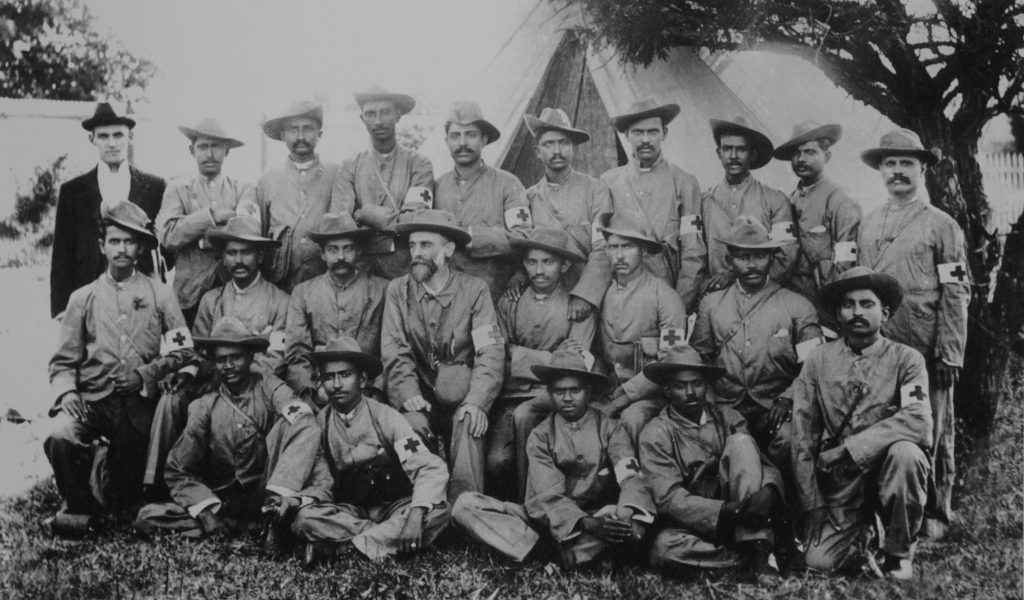 Gandhi and his “Indian Ambulance Corps” during the Boer War.

The American south is not the only place where black leaders are demanding that “racist” statues be torn down.

Statues of Cecil Rhodes and Gandhi are being removed in sub-Saharan African countries.

The University of Ghana erected a Gandhi statue in June of 2016. Then they tore the statue down in October of 2016 when many professors and students called it “racist.” The campaign to remove the statue adopted the rhetoric and hashtags of the American Black Lives Matter movement.

Another statue of Gandhi is under attack in Johanasberg, South Africa, where Gandhi once lived. That statue has been repeatedly vandalized.

Gandhi moved to South Africa in 1893 and bought a plantation. The first thing he did was fire all the black workers and hire East Indians. He opposed racial integration between Indians and blacks. In fact, he initially was pro-British.  He organized an all Indian volunteer “stretcher-bearer” unit to aid British soldiers during the Boer War. It was called the “Indian Ambulance Corps.”

When he moved to South Africa, neighborhoods were designated as being for either blacks, whites, or Asians. However, the British soon changed this to just white and non-white. This allowed blacks to move into Asian neighborhoods. Gandhi’s first protests were against the integration of Asian neighborhoods with blacks. He eventually went back to India, which was still a British colony at the time, and launched a national protest movement against the British. 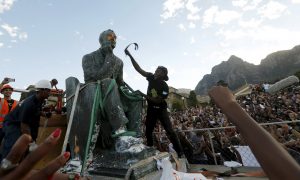 Cecil Rhodes statue being removed in 2015.

Later on, Gandhi was co-opted by the Civil Rights movement in the United States and the ANC in South Africa. There is also a Gandhi statue at the Dr. Martin Luther King Center in Atlanta.

The Gandhi statue in Johanasberg was only erected in 2003.