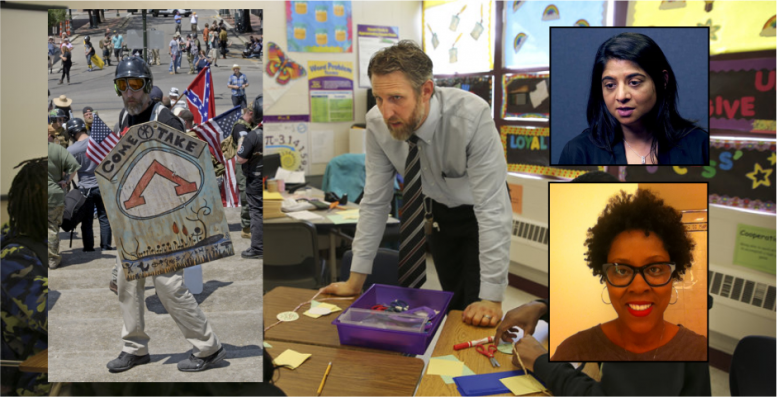 Earlier this week, a New Orleans elementary school principal was suspended for two weeks because he attended protests against the removal of Confederate monuments.

Nicholas Dean was the principal of the Crescent Leadership Academy [CLA]. It is 98% black. It is a “second chance” charter school for students who were behavioral problems at other schools in New Orleans. It is part of a special state-run school district for poor performing black schools. (see below for more details)

The school’s superintendent is Tracy Bennett-Joseph, who is a black female. She initially suspended Dean for two weeks and called for an investigation.

Now Kunjan Narechania, the East Indian Superintendent of the RSD, says he is fired. Narechania publicly denounced Dean saying “any educator who is unwilling to prioritize and respect the humanity of all children has no place in schools.” She said that the CLA board of directors voted to fire him.

The New Orleans Advocate has been agitating against Dean and published fake, libelous claims that he wore “Nazi,” “SS,” and “White Supremacy” symbols at protests. Even ADL spokesman Mark Pitcavage says there is no evidence that Dean is a “white supremacist” or supports the Nazis.

This school district is a massive state project launched in 2003 to improve poor black academic performance in the state of Louisiana. It is referred to as both RSD and RSDLA.

RSD includes poor performing black schools from all over the state. The majority of the schools are in New Orleans and Baton Rouge. The district is 95% black and lavishly funded by state tax dollars state. In 2014, RSD schools were getting around $13k per pupil. Meanwhile, many public schools in poor white areas were getting $8k or less per pupil.

Since white people provide a large majority of the state tax revenue for Louisiana, the RSD facilitates a massive transfer of wealth from the white community to the black community.

Academic performance among blacks in the RSD has not improved. It is now widely seen as a failed project and an embarrassment. The state is now trying to shrink the district and eliminate unnecessary administrative jobs.