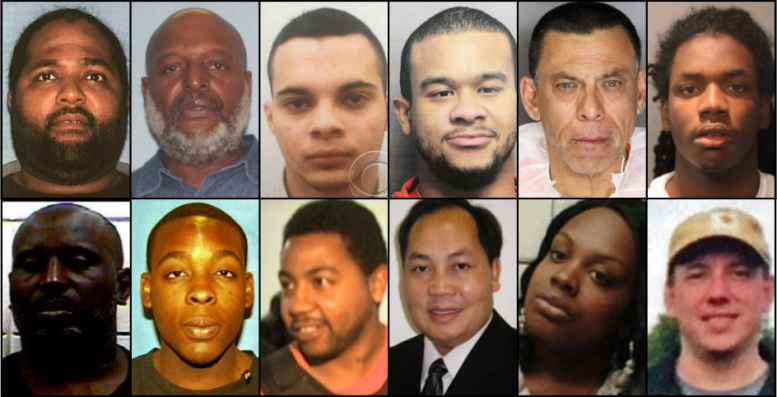 We looked at all multiple victim intentional murders. We define “deadliest” as having the most fatalities. In the case of a tie, the one with the most additional injured victims is considered the “deadliest.” We used the Gun Violence Archive as our main research tool to produce this list. If you think there are any mistakes or mass killings that should have made the list, please e-mail us.

Among the top twelve deadliest: (There was an eight-way tie for fifth place). The suspects are seven black males, a black female, a white male, a Puerto Rican, an El Salvadoran, and a Hmong. The Puerto Rican has a Mulato appearance and the El Salvadoran has a Mestizo appearance.

Despite the popular media narrative that “most mass shooters are white males,” we found the exact opposite to be true. White people were dramatically over-represented as victims compared to suspects.

Of the eight white suspects, every single fatality appears to be white. One of the perps reportedly injured a Latino. However, black and immigrant mass killers crossed racial lines often. Many black and immigrant killers targeted white people exclusively.

A Puerto Rican, a Hmong, and Arab all killed white victims exclusively. The Arab killer was at least partially motivated by racial/religious hatred. The Puerto Rican killer was infatuated with Islam and Jihadists. He was also probably insane.

(4, 1) March 15th, Metairie, LA. Two black males and an elderly black female were shot in the head execution-style. One white male was stabbed in the head. An unidentified female was shot in the face, but survived. The killings took place in two different apartments in a Metairie apartment complex. Police arrested and charged a black male who is a local cocaine dealer.

(3, 0) February 5th, Jupiter, FL. A white male murdered three white victims. The perp was selling drugs and guns. There were one or two accomplices. Another white male has been charged as an accomplice.

(3, 0) April 24th, Savanah, GA. Three people were shot and killed inside a home. A black male has been arrested for the murders. The victims are two black males and a black female.

(3, 0) March 12th, North Topeka, KS. One, or more, white males killed three white victims inside a home.  A total of five white males has been arrested in connection with the killings.

(3, 0) May 10th, Yell County, AR. A white male killed a white police officer and two white females. The two female victims were related to his ex-girlfriend.

(2, 4) April 2nd, Chicago, IL. Multiple black males got out of a car and opened fire on a group of black male victims.

Obvious, the raw data paints a vastly different picture than what is commonly portrayed in the entertainment industry, the media, and by left-wing foundations. Just take a look at these outrageous headlines from major media outlets.

Blacks commit spree shootings in extreme disproportion to their share of the population. It may be true that white and Asian spree killers have a higher average number of fatalities.

The only time that blacks drop off the list is when you look at spree shootings, with very high death tolls, over a long period of time.

Bonus: (Starting in May we stopped listing new killing sprees with two fatalities and two injured)

(2, 2) January 12th, Salinas, CA. Four Latino males were shot. Two of them died. One or more Latino men from a rival gang are believed to be responsible.

(2, 2) January 6th, Pasadena, CA. Black males opened fire at a memorial vigil for a member of a rival gang. They killed two black males and wounded a black male and a black female. The Pasadena police chief said witnesses immediately refused to cooperate.