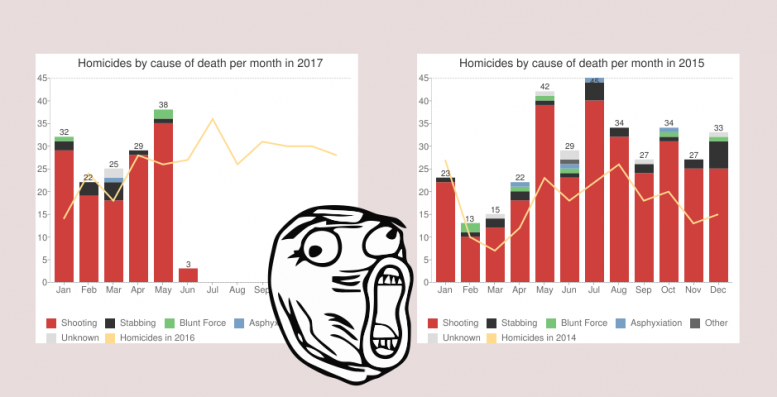 Currently, Baltimore is set to break it’s 2015 record with ease. The Baltimore Sun says there have been 146 murders between January and May. During the same time period in 2015, Baltimore had 115 murders.

The Baltimore City Paper is keeping a more detailed tally. They list 144, with police having re-classified one as justifiable. This gives us 143 murders with 132 black victims, ten white victims, and two Hispanic victims. The city of Baltimore is about two-thirds black and a quarter white.

Review of the ten white murder victims from Jan – May:

Of the ten white murder victims, four have resulted in an arrest. The latest is the murder of eight-month-old Reese Bowman by a black daycare worker. Two are white on white and a fourth suspect has not been identified. All four of the white murder victims, with a suspect who has been charged, were killed by someone they knew.

Most of the other six murders appear to have been random

A white female was shot and killed while driving her car down the street.

An elderly white male was attacked by multiple people and stabbed to death while walking down the street. There was a witness, but the media never printed a description of the at-large suspects.

A white female was shot while walking down the street.

A white male was shot and killed. Another unidentified person with him was also shot and survived. The media never published any details on the at-large suspect.

A white male was shot to death walking down the street.

A white female was stabbed to death. Witnesses described the perp as Hispanic.

Large urban communities, like Baltimore, Chicago, Detroit, and New Orleans, have dismal rates of solving murders. Most of the murderers in these cities are black. When you look at the data from a city like Baltimore, it is easy to see why 53% of American murder victims in 2015 were black, but only 44% of murder victims with a known suspect are black. The overwhelming majority of black victims are killed by a black perpetrator and black perpetrators are more likely to never get charged than other races.