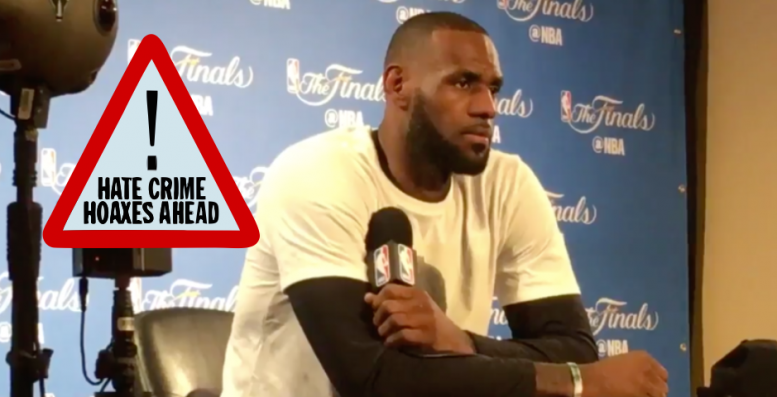 Black superstar basketball player Lebron James held a press conference on June 1st. He claimed to be the relentless lifelong victim of white racism. He said this racism culminated in “racist graffiti” on the gate of his twenty-one million dollar Brentwood mansion on May 31st. The alleged graffiti was given national publicity, even though there is no picture of it and no corroborating statement from police.

Police did not even see the graffiti. James claims he found the graffiti, painted over it, and then called the police. The entire neighborhood is riddled with video cameras, but police say they have no video evidence of the alleged crime.

On June 4th, FOX Sports writer Clay Travis called BS on the alleged graffiti. Travis publicly accused James of inventing the story to draw attention away from his poor performance at the NBA finals. James had previously been criticized earlier in the season for some of the excuses he has given for losing games.

Travis later defended himself on the website Outkick The Coverage. Travis maintained that the graffiti was probably a hoax. He said he called the police and they told him they had no information to share, not even a police report. Travis went on to denounce the NAACP and the media for wildly hyping an incident that is most likely a hoax.