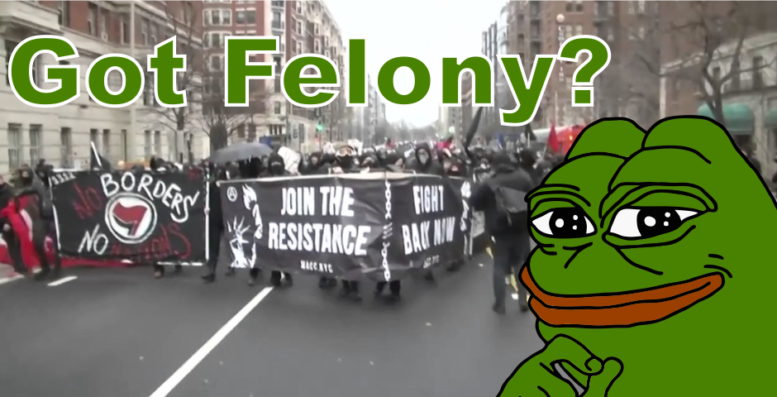 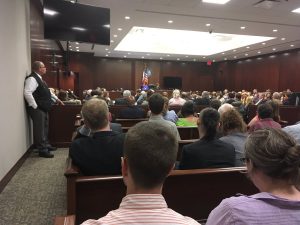 The DC courtroom on Friday.

Note: Antifa is a loose-knit network of far-left extremists. Not all of the suspects necessarily call themselves Antifa, but a very large percentage do.

We previously reported that fifty-eight Antifa had felony arraignments in DC yesterday. The courtroom was so packed that the Judge had to call for extra chairs. These people are among the two hundred and thirty-one suspects arrested for rioting at Donald Trump’s inauguration. The Federal government is still pursuing felony charges against over two hundred of them.

Fifty-five of the suspects plead not guilty and demanded jury trials. The jury trials have been scheduled on dates ranging from December of 2017 to October of 2018. Among the people with jury trials is high profile left-wing “journalist” Aaron Chantu. He has written articles for a variety of left-wing media outlets.

There were two big developments. The government plans to use data from over one hundred confiscated cellphones. This cell phone data allegedly shows that many of them were conspiring to riot and commit crimes. Disputes and discovery requests concerning the phone data is a major reason for a large number of the trials being pushed back all the way to October 2018.

Despite claims of “collective solidarity,” that no one would accept a plea deal, three people did accept very favorable plea deals.

Hanna DeMarte and Nathaniel H Jaffe accepted plea deals for one count of misdemeanor rioting. They were given six-month probation, $550 in fines, and fifty hours of community service.

Devin E Bartolomed accepted a plea deal for assaulting a police officer, misdemeanor rioting, and misdemeanor destruction of property. He will be sentenced on June 21st..

Another rioter, Dane Powell, had previously accepted a plea deal for assaulting a police officer. He will be sentenced on July 7th. More suspects have felony arraignments on June 23rd and June 27th.

The following people now have jury trials scheduled for felony rioting, conspiracy, and destruction of property.

The following people have jury trials scheduled for felony rioting, conspiracy, destruction of property, and assaulting a police officer.