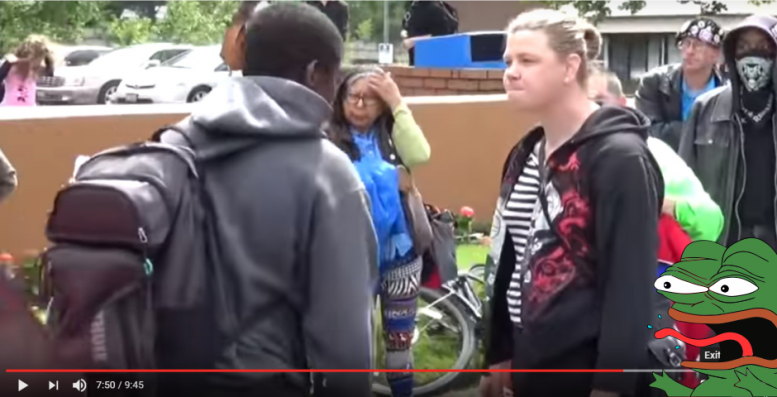 Update: Youtube has banned this video and is using their audio matching technology to block anyone from re-uploading it. To watch the video, click here.

This video was taken on June 10th near the Hollywood Transit Center in Portland, Oregon. Two men are attempting to film Antifa members. There is an unseen man, named Leo Stratton, with a handheld camera and a black male using a body camera and his cell phone camera. Both have youtube channels. The black male goes by Airliner World.

The Antifa scream hysterically for them to leave. A white male, who seems to be the ringleader of the groups, begins screaming in the face of the black male. He keeps saying he is going to knock the black male “the f*ck out.” The white male is apparently a transsexual and is referred to as “she” by other Antifa members.

Other Antifa try to block the camera held by Leo Stratton with jackets and flags so the assault will not be captured on camera. You can see the Antifa transexual throw a weak punch and then gets hit and thrown the ground. Instead of rushing in, the other Antifa scream hysterically and press the siren button on their megaphone.

The victim then lets the Antifa (Trantifa?) go. He remains sitting on the ground while other Antifa tries to comfort him. The black male filed a report with the Portland PD.

The entire incident was captured on both the handheld camera and the body camera.