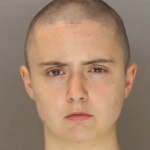 Lisa Joy Simon, 23, was arrested in Harrisburg, PA on Saturday. She allegedly struck a police horse in the neck using a wooden pole with a nail sticking out of it. A police horse named Sampson suffered minor injuries.

The attacked occurred during a demonstration against radical Islam. A group called ACT was leading the demonstration. Simon was counter-protesting.

Simon has been charged with aggravated assault of a police officer, taunting police animals, prohibited offensive weapons, obstruction to law enforcement function, resisting arrest, and disorderly conduct. It is being incorrectly reported by local media that she is still being held at Dauphin County Jail. Public records show that and she was bonded out on Monday. Bail was allegedly set at $200k.

Many on social media are claiming she is really a man. The Dauphin County Jail lists Simon as a female.

Police say that other Antifa members were carrying baseball bats and bamboo poles with the ends sharpened into points. Despite that fact that Antifa openly promotes violence, they are still being supported by major far-left political groups like the Southern Poverty Law Center.

Antifa violence against police horses is fairly common in Europe. They will throw fireworks at the horse to try to get them to panic. There was even a notorious incident in Europe where Antifa members obtained lion feces from a zoo and hurled it at police horses. This made the horses panic and go crazy.