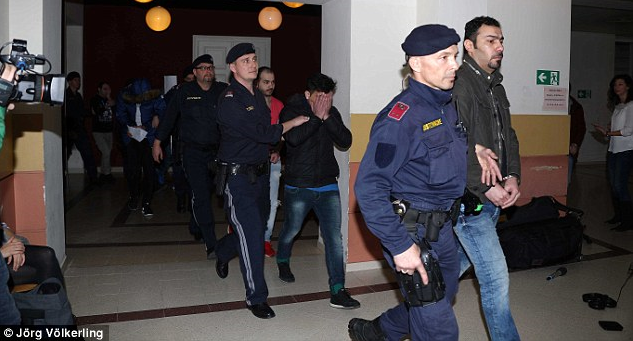 Remember New Years Eve 2015? Wild tales of newly arrived “refugees” sexually assaulting women all over Europe? They the media and the politicians denied everything. We keep finding out that not only was it true, it was even worse than we thought.

A trial is underway in Austria over the gang rape of a woman on New Year’s Eve 2015. Nine male members of the same Iraqi family are on trial. Sabine K., 29, was visiting Vienna. She was intoxicated at a bar, when a group of Iraqi men separated her from a friend. They led her outside where more Iraqi men were waiting. The group rushed her into an apartment to rape and sodomize her. She screamed for the attack to stop in both German and English.

Semen stains from six of the men were recovered from the victim’s body. Cellphone data shows that the gang rape lasted two hours.

The perps were newly arrived illegal aliens from Iraq. Or, as the European media euphemistically calls them, “refugees.” All of the perps illegally entered Austria between May and December of 2015.

The fact that nine men, all from the same family, participated in a gang rape together, demonstrates that rape is ingrained in their culture. In fact, Arab men even have a word for recreational gang rape. They call it “taharrush.”  Of the nine perps, only one confessed. The other eight have shown no remorse. One of the perps was so bold he took a selfie with the victim.

Sabine K was treated at a trauma clinic trauma clinic and is now under psychiatric care for post traumatic stress. The trial will resume on Thursday and sentencing is scheduled for March 6th.