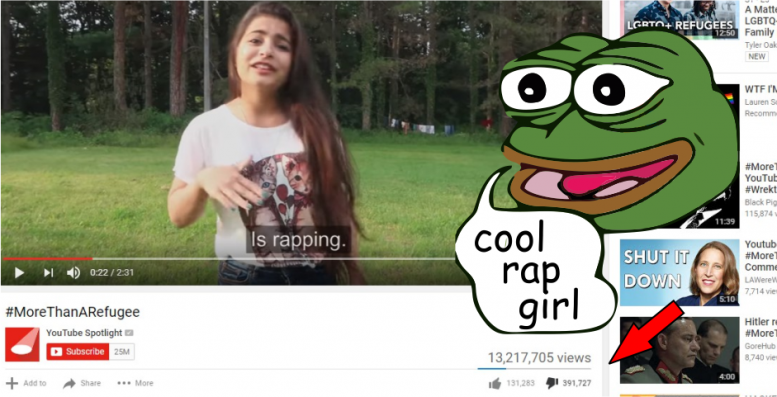 Recently the International Rescue Committee [IRC] joined forces with several Youtube content creators to try to put a positive spin on refugees. IRC receives grants from the US government to bring refugees to American cities.

Then Youtube did an official collaboration making a demo real using the best footage. The result is a two and a half minute video placed on Youtube’s official corporate Youtube Channel. It features video clips make by The Young Turks [TYT] and Fly With Haifa.

Youtube chose not to feature content from another video in the series, made by Jouelzy, about refugees from the Congo that have been placed in Boise, Idaho. Recently three refugees tortured and sexually abused a five-year-old white girl in nearby Twin Falls, ID. IRC is the same organization bringing refugees to Twin Falls.

The video shows three cherry-picked refugees explaining what they bring to the table. One is a teenage Iraqi girl who is allegedly is a great rapper. One is a Sudanese woman who is supposed to have great soccer skills. The third is an older Palestinian man who makes homemade kites. Apparently what Western Civilization is lacking the most is female rappers, female soccer players, and people who can make homemade kites.

The video has been downvoted three times for every one upvote.

TYT admitted failure within twenty-four hours of the demo reel being posted. However, they claim that the people who downvoted it are “racists,” “Nazis,” and motivated by “fear.” One co-host suggests that the video should have never allowed comments.

Note: International Rescue Committee [IRC] is a far-left non-profit that receives US taxpayer dollars to bring Sudanese, Congolese, Iraqi, and other “refugees” to the United States. It is led by David Miliband, who was once the UK Secretary of State representing the Labour party. His brother, Ed Miliband, is a former leader of the Labour party. Memos from the Labour party have repeatedly exposed plans to gain more power by importing new third world voters.

Miliband’s parents were both outspoken Marxists. Their father was a Marxist academic who worked at multiple Universities in Belgium and England. Their mother was a Marxist activist from Poland who met their father when she was his student. The Miliband brothers, who are Jewish, justify open borders and mass immigration by claiming open borders allowed their parents to escape the Holocaust.