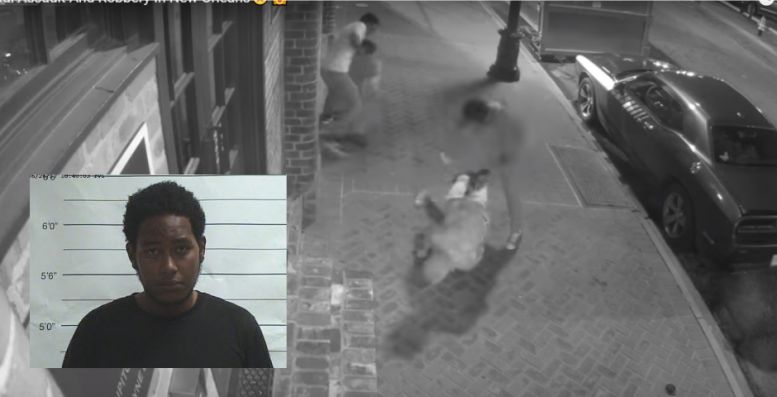 Two whites males from Boston went to New Orleans for the annual convention of the General Assembly of the Unitarian Universalist Association [UUA]. They were savagely attacked by a group of black males Saturday evening. One of the victims was left near death. He is currently in a coma and listed in critical condition.

The victims are James Curran and Tim Byrne. They were attacked around 9:00 PM while they walked back to their hotel in the French Quarter.

One suspect, Dejuan Paul, 21, has been arrested. The New Orleans police department says that they know who the other three suspects are.

During this video, the police allege that violent crime is “down about 39%.” This is only based on reported crime, and it is widely believed that fewer and fewer victims even bother to report that they were attacked. The New Orleans police spend so much time investigating murders and sexual crimes against children that they don’t have the resources to investigate much else. New Orleans had the 7th highest murder rate in the USA in 2016. It had the 4th highest in 2014.

Guest
KeepsItReal
Share On TwitterShare On GoogleShare On Odnoklassniki
Please flag comments that are sexually explicit or advocate criminal behavior.

Some of the blacks may say this is bad and w/e but they secretly love that this happened. Almost all blacks will say that they deserved it.

I’m sick and tired of this crap and White people need to wake up and pay attention when around savages and use your brain and get a CPL.

Guest
Jay
Share On TwitterShare On GoogleShare On Odnoklassniki
Please flag comments that are sexually explicit or advocate criminal behavior.

The UUA “church” was a primary source of agitation for civil rights 60 years ago. Karma is a bitch.

The left eating its own. What not to love?

Never, ever interfere when your enemy is in the process of destroying himself.

I saw this one on flaherty’s channel. You could tell that the one guy was badly hurt by the way that his brain kept misfiring his right arm to twitch. His friend seemed entirely unable to supply even basic first aid. In my little fantasy world, the perp would be chained out in a public square and beaten severely.