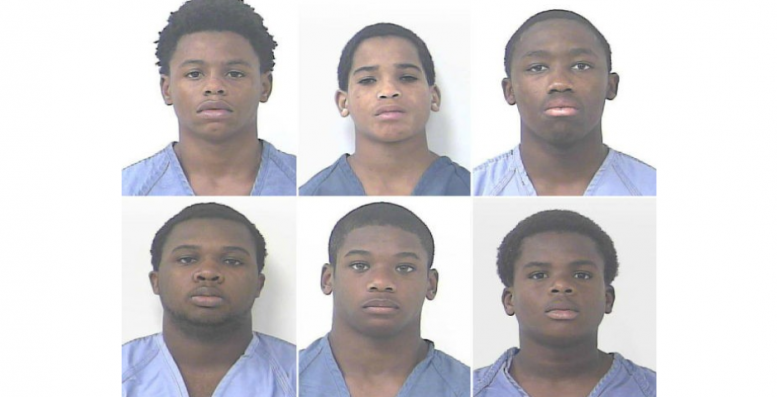 On April 27th, six black teenagers broke into the home of Brett Browning on North Hutchinson Island, Florida. They stole a 2014 Porsche, two handguns, and a safe containing $200k cash.

Rural Scott, 15, Jeremiah Laplace, 15, Michael Bush, 14, Joshua Sargeant, 14, Shomari Smith, 14, and Walter Walker, 16, have all been charged. Police say every single one already has a long rap sheet despite being so young. Five out of the six have reportedly confessed.

They eventually were caught because police found the stolen Porsche and one of the boys had left personal effects inside the car. They also stole another car to drive to Browning’s house to burglarize it. Police recovered fingerprints from one of the suspects inside that car.

All the money is gone. What they allegedly spent the money on suggests a far bigger conspiracy involving their families.

One of the suspects says he spent his share of the take on a Dodge Challenger Hellcat and a 2009 Mercedes C300. The cars went to his mother and brother. Obviously, they would have known the cars were purchased with stolen money.

He also claims to have spent $11k on a permanent set of gold teeth. Something everyone would have noticed and probably required a signature from a parent.

Another suspect claims he gave $40k to his mother. Obvious, she would have known it was stolen.

Rural Scott, 15, has been arrested nine times since June 2015. Police say he admitted to informing his mother that they robbed the house right after it happened.

Jeremiah Laplace has been arrested fourteen times since the turned thirteen. Several of the suspects have already been arrested and charged with burglary and grand theft auto in the past.

So far, none of the suspects have ever been charged as an adult.

It is inconceivable that all, or at least most, of their families did not know they were in possession of a large amount of stolen money. Based on claims made by three of the perps, their families were in on it and probably even put them up to it. Since juveniles are punished so lightly, older criminals often recruit people under eighteen. Sometimes they recruit their own children.

3 Comments on “Families were profiting off of teenage burglary gang”