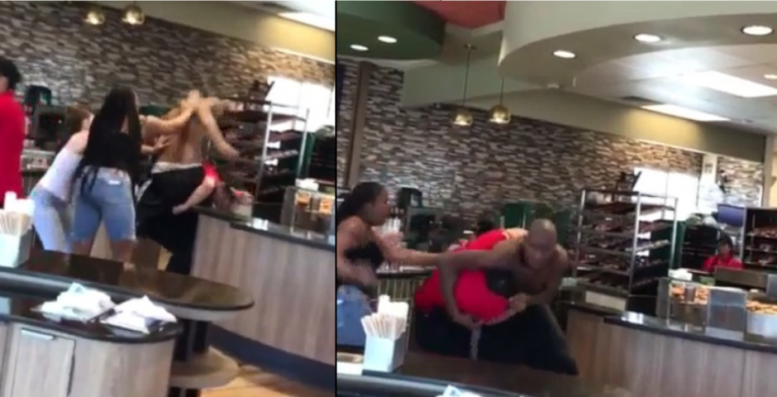 Recently we posted surveillance video of an unprovoked attacked on a mother and daughter at a Baxley, GA fried chicken takeout. The mother was the owner and her daughter is only fifteen. A black couple brutally attacked them.

This type of attack is, apparently, not all that rare. Here are three more recent examples of fast food employees being attacked. These, along with the Baxley, GA attack, all occurred over just a six day period.

On Tuesday, June 27th in Henderson, NV a huge black male brutally pummelled a much smaller white Krispy Kreme employee. The employee saw a group of black males and females fighting and asked them to leave. Moments later the perp charges into the Krispy Kreme and savagely pummels the employee.

On Sunday, June 25th, three black females attacked and beat a female employee at a McDonalds in Daytona Beach, FL. They were angry that the ice cream machine was broken. Two of the suspects are juveniles.

On Friday, June 23rd, a black male attacked the manager of a fast food restaurant in Citrus Heights, CA. He tried to grab the manager’s wallet. Then he jumped the counter and threatened other employees. Police say the perp was high on drugs and harassed more people in the parking lot.

Bonus Video: Earlier this month, five black females were arrested for mob violence at a Waffle House in Lancaster, PA.