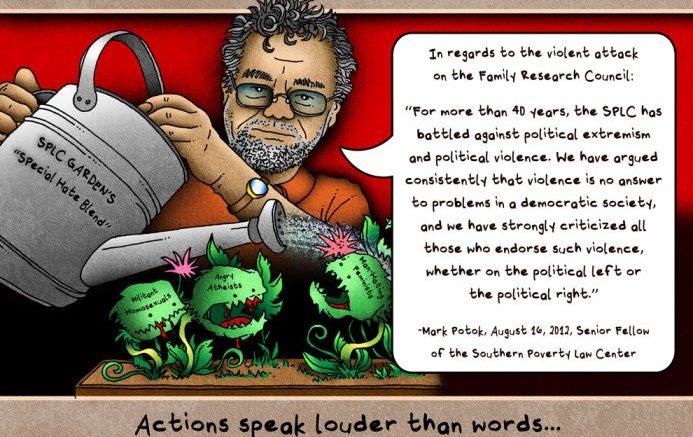 The SPLC is famous for pushing hate crime hoaxes and extremely vague and dubious “victim fan fiction.” Recently the SPLC was even denounced by numerous liberal media outlets for making wildly false claims on their website and twitter account accusing the Dothan, GA police of framing black men. When reporters started calling the SPLC, asking for the evidence, they were forced to admit that no evidence existed. In this new example, we see SPLC spokesman Mark Potok still hyping a hate crime hoax over two months after it was debunked by police.

On December 1st, 2016, a Muslim woman in a head scarf said she was accosted by three white males in New York City. The men supposedly referenced Donald Trump and tried to pull off her head scarf. Police quickly declared the story to be a hoax, but not before certain left-wing media outlets gleefully hyped the fake story. The woman is now facing criminal charges for the hoax.

There was also a similar hoax on November 11th, 2016. An Arab woman at the University of Michigan claimed she was attacked by a white male. Supposedly she was targeted for wearing a head scarf. We were supposed to believe that the attack occurred because the election of Donald Trump had emboldened “racists.” The Ann Arbor police department and the FBI quickly concluded that the entire story was a hoax.

On MSNBC, SPLC spokesman Mark Potok claims that the election of Donald Trump caused a massive uptick in hate crimes by white people. Yet the best he can do is a cite a notorious falsehood. Potok made this false claim on MSNBC’s Hardball with Chris Matthews, Monday, February 21st. You can verify the date of the episode, because it references Milo Yiannapolis resigning from Breitbart across the bottom of the screen. This is something that happened earlier in the day.