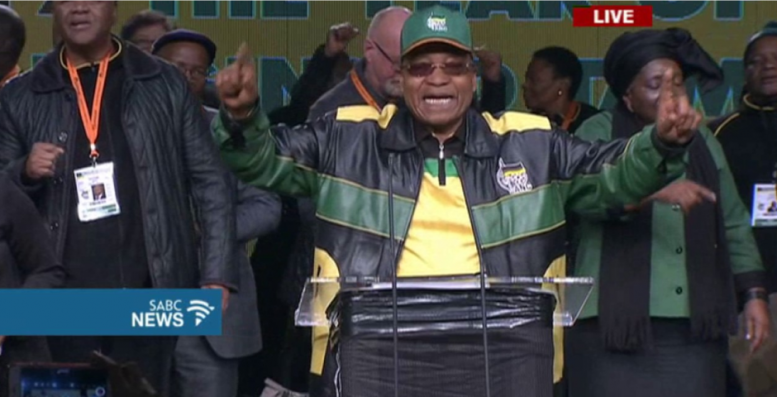 A heated six-day ANC Policy Conference ended today. The ANC appears fully committed to a program of “radical economic transformation” that will include the redistribution of white-owned assets to blacks. South African President Jacob Zuma railed against “white monopoly capital,” which he called “the primary adversary of the collective interests of our people.”

The Youth League issued a statement warning the ANC’s “old guard” that membership will be liquidated if they don’t return to the historical mission of the ANC. They characterized white monopoly capital as “the enemy of the revolution.” They also want Derek Hanekom to be disciplined.

Zuma told the crowd “We agree that using the fiscus for land redistribution must be accompanied by other measures if we are to achieve the goal at the required pace.” He followed with “where it is necessary and unavoidable this might include expropriation without compensation.” The current plan from the ANC’s economic transformation team calls for compelling all mining companies to be at least 30% black owned. The conference also discussed the possibility of nationalizing the South African Reserve Bank.

Zuma was also under attack for his relationship with the Gupta family. This is an Indian family, who’s members are among the wealthiest people in South Africa. Gupta-owned companies allegedly diverted $3.3 million of public funds to pay for a super lavish wedding. The Zuma administration is accused of covering it up.

The ANC fears losing more ground to the new Economic Freedom Fighters [EFF]. This is a party is run by Julius Malema, the former president of the ANC Youth League. It was founded in 2013 and its supporters are disproportionately young and male. The EFF’s subscribes to Sankarism, after the former Communist dictator of Burkina Faso Thomas Sankara. The EFF openly calls for the confiscation of white assets without compensation.

Critics of Malema say he is pushing the country towards civil war.