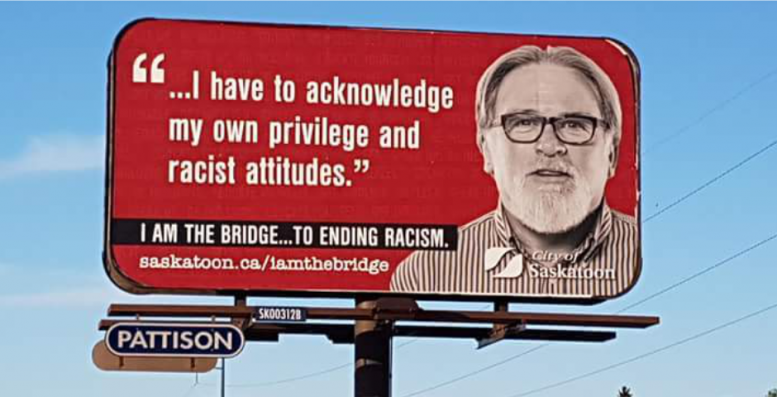 “White Privilege” is a conspiracy theory that blames white people for the shortcomings of non-whites. The terms “white privilege” and “check your privilege” as used, almost like racial slurs, to denigrate, stereotype, and scapegoat all white people.

Now the Canadian city of Saskatoon is using public tax dollars to promote this incendiary ideology. They have already spent $14,000 for the campaign in 2017. They have placed advertisements inside restaurants and bars, ads at bus stop shelters, and even giant billboards.

One of the billboards features local resident Jim Williams and a quote about recognizing his own white privilege. Another features a mixed race woman claiming she is viewed as less important than white people. Saskatoon Mayor Charlie Clark, and Director of Community Development Lynne Lacroix are defending the racially divisive billboards.

The official Saskatoon website is promoting videos by Tim Wise. This is a Jewish-American author who has become wealthy promoting the “white privilege” conspiracy theory. Wise has publicly confessed to being a former criminal. He says he operated a “fake id mill” while he was in college.

Wise has also publicly advocated violence. In 2012, he called on his followers to shoot members of the Tea Party movement in the face.