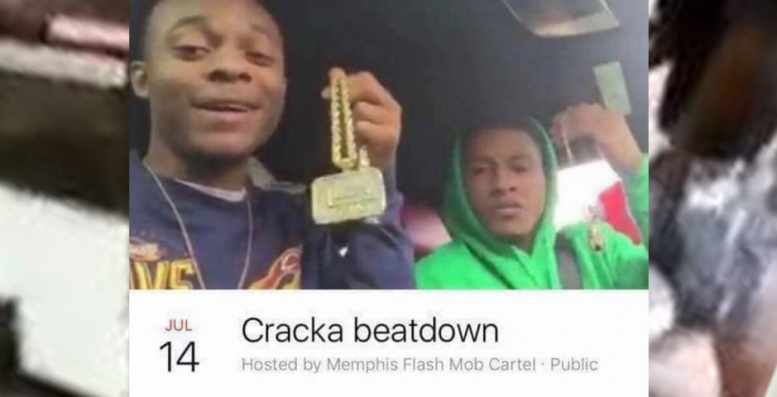 A group of black males, calling themselves the “flash mob cartel,” advertised on Facebook that they would attack white people at the Wolfchase Galleria Mall this evening. Facebook censors deleted the page after people complained.

The threat is disturbing because racially motivated mob attacks on white people have occurred in Memphis in the past. The Wolfchase Galleria Mall has also been the scene of black mob violence many times. Some of the mob violence is promoted in advance online.

In September of 2014, a large mob of young black males and females savagely beat two white Kroger employees in the parking lot. The local authorities alleged that the assaults did not warrant “hate crime” charges because a black security guard was also struck when he chased the attackers away.

Each December, young blacks riot and engage in mob fights at Wolfchase Galleria Mall the day after Christmas. This past year, there was mob violence at Wolfchase Galleria and also at Oak Court Mall in Memphis. Police say the perps promoted the mayhem in advance on social media. Seven suspects were arrested.

This video is from the 2014 annual Boxing Day riot at Wolfchase Galleria Mall.

5 Comments on ““Cracka Beatdown” advertised for today at Memphis Mall”