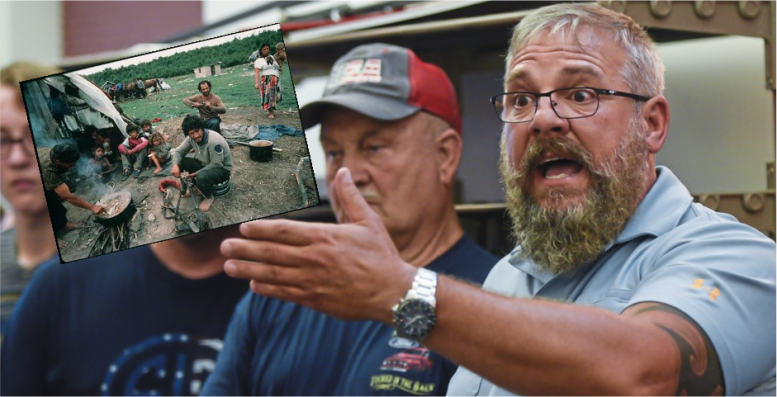 ICE has dumped over forty illegal aliens on a small Pennsylvania community. They were released from ICE custody under the Alternative to Detention [ATD] program. ATD is considered a “humane alternative” to detention centers but does take into account the communities that are affected. Some of them are required to wear GPS ankle bracelets.

The illegal aliens are Gypsies, allegedly from Bucharest, Romania. They have been placed in California, PA which is a town of fewer than seven thousand people. Since Romania was admitted to the EU, there has a been exodus of Gypsies who seek greater welfare benefits in other countries. This is sometimes referred to as “benefits tourism.”

One hundred and fifty townspeople packed a community meeting to voice their outrage over the behavior of the Gypsies. The primary complaint is the practice of open defecation by the men and children. Many will defecate on public streets. Townspeople also complained that they butcher chickens in public areas, throw trash everywhere, disregard traffic laws, and engaging in unruly behavior at public places.

The Gypsies are playing the race card. They claim they face persecution in Romania and are demanding asylum in the United States.

The town authorities say they were given no advance warning by the Federal government. They say they feel like the Feds are ignoring them. The Gypsies are renting apartments from local real estate agent Vito Dentino. The Federal government is presumably paying for their rent. Dentino has warned the community that as many as one hundred more Gypsies may be on the way.

The townspeople are being told to give the Gypsies more time to assimilate. However, Gypsies have lived in Romania for hundreds of years, but never assimilated. The Romanian government has tried in vain to assimilate Gypsies since the 1850s. In the 19th Century, the government encouraged inter-marriage, moved Gypsies into the cities, and made public education mandatory for Gypsies to send their children to school.

All of this had little effect. To this day, the Romanian government still struggles to get Gypsies to send their children to public schools. Across Europe, Gypsies are most commonly associated with very negative attributes like high rates of crime and welfare abuse.

Notes: The Ottoman Turks called them “Egyptians,” but no one knows why. One Gypsy myth is that they are descendants of slaves who built the Egyptian pyramids. This myth has been disproven. The Gypsies came from northern India and are possibly related to the Thuggee of Northern India.

The various central Asian peoples used large numbers of them as slaves for hundreds of years. The first Gypsies living in what is now Romania, formerly the Danubian Principalities, were slaves of invading armies of Mongols and Tartars. Many of these Gypsies were given to Monasteries are servants. By the 1500s, free Gypsies and Gypsie slaves lived and worked side by side. Gypsie slavery was outlawed in 1847. A system of compulsory labor as a form of taxation for pheasants was outlawed in 1856.

One major problem with Gyspsy benefits tourism is the fact that they are clashing with other minority groups. Housing projects across Western Europe and America have become scenes of racially charged turf wars between Gypsies and other groups.

In this incident, Gypsies and African-Americans engaged in a Christmas Day racial brawl at a section 8 apartment complex in Houston, Texas.

Guest
Ray
Share On TwitterShare On GoogleShare On Odnoklassniki
Please flag comments that are sexually explicit or advocate criminal behavior.

It is truly exciting when black people feel someone is barbaric. This could be a match made in heaven

because the Gypsy is lower than the Black man. Anyone who knows them will say the same.

Guest
jimtrees
Share On TwitterShare On GoogleShare On Odnoklassniki
Please flag comments that are sexually explicit or advocate criminal behavior.

They need to taken to the landlords house and given tents. Take them to John Wink McCain’s house.

Guest
don
Share On TwitterShare On GoogleShare On Odnoklassniki
Please flag comments that are sexually explicit or advocate criminal behavior.

Guest
Duke
Share On TwitterShare On GoogleShare On Odnoklassniki
Please flag comments that are sexually explicit or advocate criminal behavior.

Pass stiff local laws. Jail and work them as long as possible.

Gypsies do not work, They run scams, cons and hustles while collecting welfare. There are many in My city and have delt with them for over 40 yrs some way or another. Usually I say the Majority but in this rare instance im gonna say all Gypsies are worthless to our society.