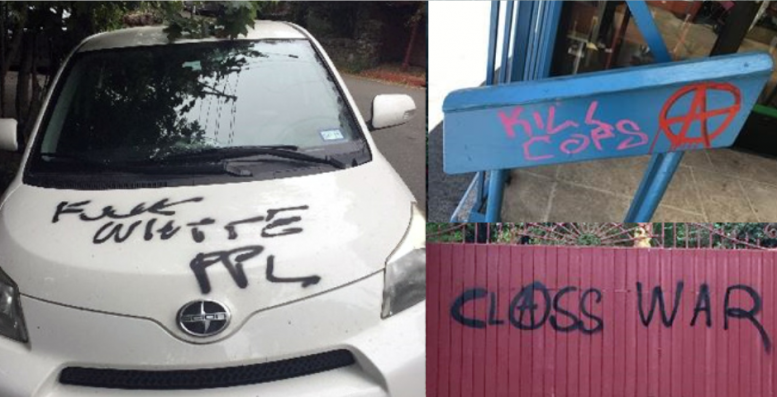 Ismael Chamu, 21, was arrested last Thursday in San Fransisco. He is from Mexico. Last month, Chamu was arrested by the police as a possible burglary suspect. He was released without charges. He has a history of attacking white people, police, and gentrification on social media. He also denounces white liberals, progressives, and Democrats. (Gentifrication is associated with trendy white liberals.)

Peter Estrada, 21, was arrested Friday. Both Chamu and Estrada are being held on an $85k bond and are charged with felony vandalism with hate crime and conspiracy enhancements. Both suspects will be arraigned Monday.

Berkeley Mayor Jesse Arreguín previously defended Chamu on social media. Chamu alleged that white police profiled, humiliated, and traumatized him last June. Jesse Arreguín called for an investigation into the police on Facebook. He has since deleted his statement.

For the past nine months, the national media has hyped allegations of hate crime vandalism by “white racists,” which keep turning out to be staged hoaxes. However, this incident of large scale racially motivated vandalism has been limited to minor local coverage.

Earlier this year, a Latino UC Berkely student stabbed two white female students. One of the victims died. Like Chamu and Estrada, the perpetrator also targetted white liberals. Both of the victims were left-wing activists. The suspect was a Latino Studies major and is on video trying to attack Donald Trump supporters in September of 2015. The suspect has dozens of anti-white posts on social media, suggesting that the attacks were racially motivated.