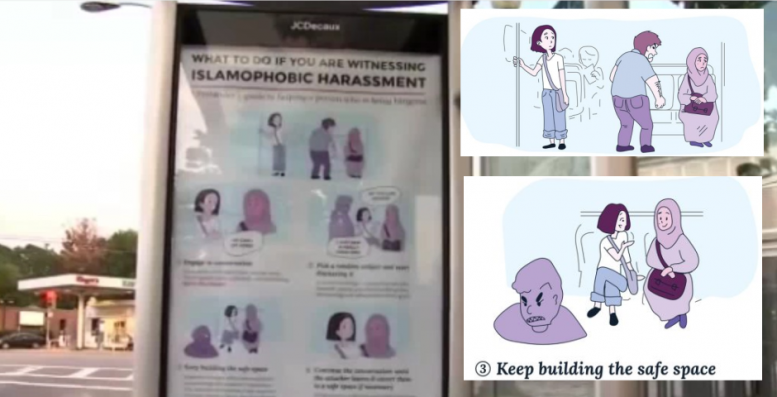 Back in 1999, the Boston Housing Authority [BHA] placed the Irish shamrock on a list of “bias indicators” that included Confederate flags and Nazi symbols. White residents in BHA housing projects, most of whom are elderly, were asked to voluntarily remove any shamrocks from public view to avoid offending non-whites. After international condemnation, the BHA backpedaled.

Now, Boston bureaucrats are at it again. This time the city of Boston has launched a “public service campaign” alleging that Muslim women are being harassed by white people. Fifty posters, which critics say are racially offensive towards whites, are being placed at bus stops around the city.

The poster was created by the left-wing French artist known as “Maeril.” It depicts a Neanderthal like white man harassing a woman in a hijab. It provides instructions on how to intervene and allegedly create a “safe space.”

Boston city officials cite one lone example of a white male harassing a Muslim woman on Boston public transportation. However, the idea that women in hijabs are being harassed is a popular media narrative. Numerous fictional claims, which have turned out to be hoaxes, have been widely hyped in the national news.

Boston was the scene of one of the most horrific Muslim terrorist attacks in US history. In 2013, two Muslim men detonated bombs at the Boston Marathon. Five people were killed and over two hundred were injured. The perps later engaged the police in a gun battle. One officer was killed and several others were wounded.

The perps were two Chechen brothers. Their family was granted political asylum by the US government in 2002 and they lived on welfare in Boston.