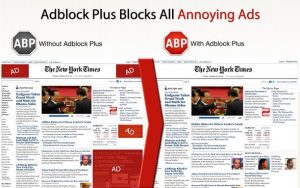 Adblock Plus is a free browser plugin that is changing the internet forever.

Google uses their virtual monopoly to try to sway the internet to the left. They openly discriminate against conservatives. Websites on the extreme left are ok, but any website with alternative conservative viewpoints get their domain name blacklisted as “hate speech.”

However, the amount of money a publisher can make off of Adsense is collapsing. This is going to forever change the way internet content is funded.

First of all, Google sells ads to the highest bidder. The amount of money advertisers were willing to pay peaked around 06/07. This was the golden age of making money online. Corporations were dumping tens of millions into Google advertising with total reckless disregard. Webmasters were cashing in and making a fortune. Then the bubble burst. Suddenly everyone realized that paying several dollars for a single internet “click” was not a sound business strategy.

By the end of 2007, the amount of money you could make off of Google Adsense began plummetting like a rock. It has fallen every year since. Today the average Adsense RPM, or average earnings per thousand page views, is just a tiny fraction of what you would have earned ten years ago.

Second, the number of people using Adblock Plus is exploding. This free browser plugin completely blocks all Google Syndicated ads, Youtube commercials, and many other types of ads completely from your view. It even makes many ad-heavy websites load must faster. It even blocks ads on Facebook and Twitter.

Media websites relying on Adsense revenue face a declining number of visitors who actually see the ads on top of a declining RPM for those who do.

This is why Examiner.com (once a major player) went out of business. They let anyone submit articles and shared ad revenue with the authors. The payout was quite nice at one time. Other revenue sharing media sites have dropped like flies. Now they have been replaced by copycats who pay the authors nothing!

Huffington Post is laying off full-time workers and recruiting more and more unpaid volunteer bloggers. Snopes is begging for donations. Newsweek/Daily Beast is hopelessly in debt and will almost certainly declare bankruptcy in the near future.

Google and Google owned Youtube have “demonetized” conservatives by denying them the same revenue sharing opportunities provided to the far-left. When you use Adblock Plus you demonetize Google and you create a more even playing field for competing ideologies on the internet.

PageFair recently conducted a massive survey of internet users. They found that Adblock experienced explosive growth in 2016. At the end of 2016, 11% of all internet users worldwide were using it. About 18% of all Americans and 25% of all Canadians use it. In the US it is most popular among males and younger people.

It is already used by over 25% of internet users in countries like Sweden, Poland, Pakistan, Singapore, and India. (About 30% or more of the people who visit Narrative-Collapse.com have Adblock installed.)

Adblock Plus works with a huge number of different browsers. It even works with mobile browsers. You can easily “whitelist” any website you want at any time. It is free.

1 Comment on “Google/Youtube discriminate against conservatives, so block their ads”