Major NGOs operate huge ships that ferry illegal aliens from the Libyan coast to European ports. Many of them are accused of working directly with criminal syndicates. They signal to human smugglers to bring the illegal aliens out to sea.

In some cases, the NGOs actually stage fake rescues. They openly admit to dumping empty dinghies up and down the coast of Libya. Then they signal to coyotajes to ferry their illegal aliens out to the empty dinghies. Then a large NGO ship collects the illegal aliens from the dinghies and says they are survivors of a sunken ship. This process is dangerous, highly illegal, and has resulted in many illegal aliens perishing at sea.

Even if the NGOs were rescuing people from sunken ships, there is no need to bring the alleged survivors back to Europe. The Libyan coast guard already has agreements in place to take the people back.

A German based NGO, called Youth Rescue, just had a large ship impounded at a Sicilian port of Trapani. The ship is named the “Iuventa.” Youth Rescue stands accused of using the ship to smuggle illegal aliens to Europe. 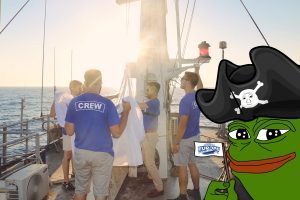 It is highly possible, if not probable, that the decision to finally impound the Iuventa was influenced by increased public scrutiny due to the Defend Europe project. The launching of the C-Star is one of the biggest news stories in Europe. In fact, the C-Star was going to launch from Sicily, but they had to move it to Cyprus. NGOs were flying in violent Antifa from across Europe to try to physically stop it.

?? We are now on our way to the Libyan coasts!