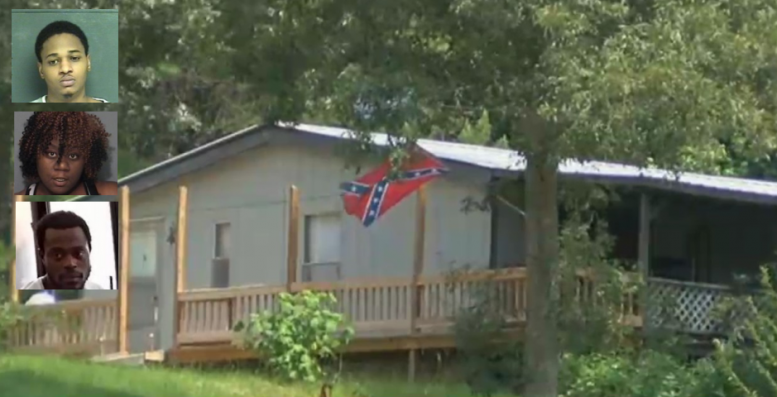 On July 23rd, at about 4:00 AM, two black males stormed a home near Piedmont, AL. Two white males, a grandfather, and his grandson were beaten and shot to death. A female hid and was not found by the attackers. A Nissan Altima was stolen and found burned a short distance away.

The victims are Joshua Dylan Moody, 23, and Travis Frost, 73. The female victim is Frost’s wife and grandmother of Moody.

Briskey and Carter were just captured at an Econo Lodge in Petersburg, VA. Rhimington Otarivs Johnson is still at large.

The day after the murders, Calhoun County Sheriff Matthew Wade said: “we don’t think this is just a random act.” However, no more information has been provided.

The victims had a Confederate flag on their porch. It can be seen in a video taken by WBRC Channel 6. Piedmont is 85% white and only 10% black. The suspects are all from Anniston, AL, which is 52% black. The actual location of the home is in the Rabbittown community, which is about 95% white.

No local media outlets have shown pictures of the victims or stated their race. Friends of Frost erected a memorial near his favorite fishing spot. This was also not covered by local media. We believe that if the victims had been black, and the suspects had been white males with a Confederate flag, the same media would treat the double murder much differently.