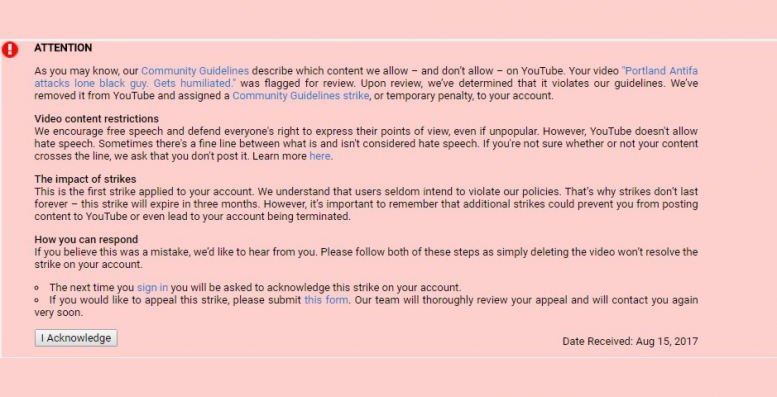 Last June, we were sent a video of a black youtube star being attacked by Antifa in Portland, Oregon. The victim goes by Airliner World & More on youtube. The Antifa recognized him as someone who had criticized them online.

We uploaded the video to the Narrative-Collapse youtube channel with no edits or commentary whatsoever. It is just the raw footage of an Antifa member committing a felonious assault. It also shows other Antifa trying to block the camera.

The video was viewed about a quarter of a million times! Youtube apparently did not like that.

They deleted the video and informed us that posting raw, unedited, commentary free videos of Antifa committing crimes is “hate speech.”

Yes, youtube is now actively trying to protect Antifa by deleting videos of their crimes. You can fight back against Google/Youtube censorship by downloading the Adblock Plus extension for your browser.

Here is the raw *.mp4 file for you to download. Please upload on other platforms.