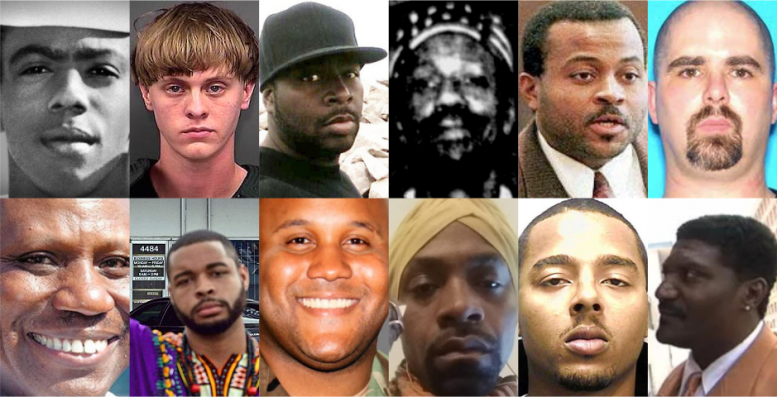 The following are the deadliest racially motivated spree shootings in recent American history.

It is probably true that white spree shooters, on average, kill more people than black shooters. However, blacks commit spree shootings in extreme disproportion to other races. That includes racially motivated spree shootings. As you can see, blacks make up 13% of the US population, but 83% of this list. If you think we have made a mistake, please e-mail us.

Notes: We define “deadliest” as the most fatalities. In the case of a tie, the one who inflicted the most additional injuries is considered “deadliest.”

(9, 13) Dec 31st, 1972, Mark Essex shot three police officers, killing two. Then on January 7th, 1973 he launched a second shooting spree targeting random white people inside a New Orlean’s hotel. He killed seven more people and injured another twelve. Essex said he wanted to kill “honkies” and carried a pan-African flag with him during the shooting. He was a member of the Black Panthers and had been involved in other black militant groups in the San Fransisco area.

(9, 0) June 17, 2015, Dylan Roof shot and killed nine black people while attending a bible study at Mother Emanuel AME church in Charleston, SC. Roof said that he wanted to kill black people and sabotage American race relations. During his trial, he had his defense team sidelined because he didn’t want them to characterize him as insane. Federal prosecutors depicted Roof as being obsessed with Hollywood movies and an HBO documentary that featured neo-Nazi skinheads. When Roof was apprehended, he had a laptop with thumb drives full of video clips from movies and documentaries about skinheads. During his confession, he described his original plan to commit suicide. The plan sounded like an exact reenactment of the ending of the skinhead movie Higher Learning.

(8, 2) August 3, 2010, Omar Sheriff Thornton went on a shooting spree at the Hartford Brewery in Manchester, CT. Thornton worked at the brewery and accused his white co-workers of being racist. He shot ten and eight of them died. Right before the shooting, he falsely claimed a racist message was scratched into the bathroom wall. This alleged message was never found. Thornton called 911 and told the operator that his only regret was that he didn’t kill even more white people. Then he shot himself in the head. The owners of Hartford Brewery were a Jewish family that had financially supported charities benefiting black people.

(7, 4) December 8, 1995, Ronald James Smith, AKA Aboudima Moulika shot eleven people inside of Freddie’s Fashion Mart in Harlem, NY and then set the building on fire. Seven victims died. There had been a series of protests in front of the store. Al Sharpton, the leader of National Action Network, had sponsored the protests and attended at least one of them. Sharpton called the owners of the store “Jewish Interlopers.” Moulika attended some of these protests. During the protests, a black security guard was repeatedly berated with abuse. Moulika went into the store and ordered all black customers to leave, except for the black security guard. He shot the security guard and ten other white and Latino victims. Then he set the building on fire. Seven of the victims died either. Four men, with gunshot wounds, escaped the fire. Smith died in the fire.

(6, 19) On December 7, 1993 Colin Ferguson began shooting people on a Long Island train car. He wanted to kill as many white people as possible. Ferguson had a history of making false accusations against white people. He also advocated violent retribution against the white race for perceived grievances. His defense lawyers argued that he went temporarily insane over “black rage.” Like Dylan Roof, he ended up firing his lawyers because he didn’t want to be characterized as insane.

(6, 4) On August 5, 2012 Wade Michael Page shot six people at wounded four at a Sikh Temple in Oak Creek, Wisconsin. Page had associated with neo-Nazi skinheads for many years and played in multiple different skinhead bands. Page committed suicide after the shooting. While the shooting was undoubtedly racially motivated, it is not known why he specifically picked Sikhs.

(6, 1) February 7, 2008, Charles Lee “Cookie” Thornton, 52, shot seven people inside the Kirkwood, MO City Hall. Thornton routinely attended city council meetings and went on tirades about white people. On this day, he was ordered to leave City Hall. Six victims died including the mayor, two police officers, two city council members, and the public works director. A reporter was wounded by survived. The local NAACP blamed the shooting on “discrimination” by the city of Kirkwood. Some members of the local black community even praised Thornton.

(5, 11) On July 7, 2016, Micah Johnson opened fire on police officers at a Black Lives Matter rally in Dallas, Texas. Johnson killed five people and injured another eleven. All of the fatalities were police officers. It was the biggest loss of police lives in a single incident since 9/11. Police eventually used a bomb disposal robot to blow up Johnson with C-4. Johnson had stated that he wanted to kill white people, especially white police officers. Johnson was a former member of the New Black Panther Party [NBPP]. Johnson attended the Nation of Islam run Mohammed Mosque No. 48 in Dallas.

(4, 3) February 3, 2013, Christopher Dorner shot seven people over a period of a few days. Four of them died. The victims were law enforcement and family members and friends of law enforcement. Dorner was a former LAPD officer who had been fired. Dorner wrote a manifesto expressing hatred for whites and Asians. He eventually was cornered inside a remote cabin. The cabin burned down with him inside it during a shootout with police. Some blacks supported Dorner. Columbia Professor Marc Lamont Hill went on CNN and said Dorner “was like a real-life superhero to many people.” Hill went on to say “it’s almost like watching Django Unchained in real life, it’s kind of exciting.”

(4, 1) April 18th, 2017, Kori Taylor AKA Kori Ali Muhammed killed three random white men and injured a fourth in Fresno, CA. Police say he was motivated by racial hatred. He espoused racial hatred and Nation of Islam theology on Facebook. He was homeless and killed a black security guard a few days earlier. He told police that after he was identified as the suspect he decided that he wanted to be known for killing white people instead of being known for killing a security guard.

(4, 0) March 21, 2009, Lovelle Mixon murdered four Oakland police officers. Three were white and one was Asian. He was eventually killed by police. The killer was motivated by racial hatred. Several black power groups openly celebrated the killings. About sixty people held a march in Oakland where he was praised as a hero. About 500 people attended his funeral, which was led by a local Nation of Islam leader.

(3, 7) October 5, 2011, Shareef Allman opened fire on his co-workers. He killed three and wounded six. Then he wounded a female jogger. He eventually killed himself. Allman was a high-profile member of the California NAACP. He had a Black Power public access tv show, in which he repeatedly interviewed Jesse Jackson. He accused his white and Latino co-workers of mistreating him.

(3, 3) July 17, 2016, Gavin Long killed three police officers and wounded three others in Baton Rouge, LA. The shooter lived in Kansas City, MO but traveled to Baton Rouge. He presumably picked Baton Rouge because of ongoing Black Lives Matter protests. Long was finally shot and killed by police. He wrote a very short anti-police manifesto that he e-mailed to a small time rapper in Ohio. Long stated that he had previously been a member of the Nation of Islam in youtube videos.