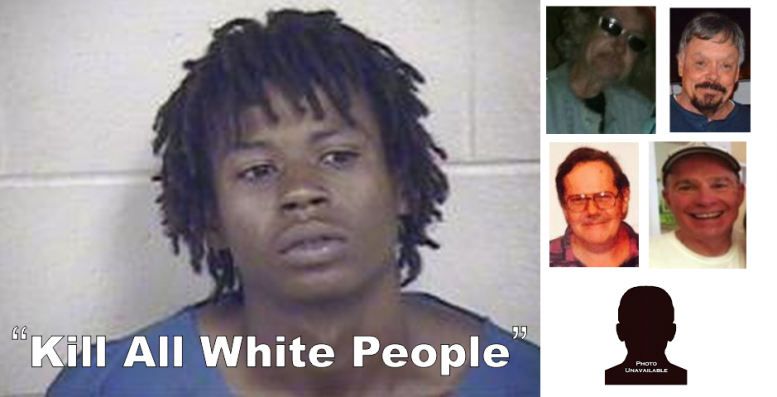 Update: The Kansas City Star just reported that this is the same Frederick Scott who threatened to “kill all white people” at his school in 2014. He was charged with harassment and expelled for the rest of the school year.

Yesterday, Kansas City police announced an arrest in the notorious Indian Creek Trail murders. Fredrick D. Scott, a twenty-two-year-old black male, has been charged with murdering two white males along the trail. He is also a suspect in the murder of three other white males. One was killed right by the trail. The other two were killed in the same part of town. All five victims are between the ages of 55 and 66.

Police say they have “no motive.” Many in Kansas City are calling the murders “racially motivated.” Despite allegedly having five victims, very few media outlets outside of Kansas City market have reported the arrest.

Scott is suspected of murdering the following five people. Most were shot from behind.

On August 13th, Steven Gibbons was returning home from the grocery store when an assailant shot him in the back of the head.

On April 4th, Timothy Rice, 57, was found dead inside a shelter at Minor Park.

On May 17th, Mike Darby, 61, was killed while walking his dog along the Indian Creek trail.

On February 27th, David Lenox, 66, was murdered while walking his dog at the Willow Creek apartment complex.

On August 19th, 2016, John Palmer, 55, was murdered while walking his dog along the Indian Creek trail.